Getty Mike Zimmer could be in the hot seat next season dependent on his selection for offensive coordinator.

Vikings coach Mike Zimmer is known to be nondescript when it comes to injuries, but his press conference diagnoses of defensive end Danielle Hunter reached their end on Friday.

Hunter was sidelined the entirety of full-team practices at training with what Zimmer called a “small tweak.” It’s become more severe as Hunter was moved to the injured reserve list on Wednesday and will miss at least the first three games of the season.

Zimmer put an end to the daily inquiries upon Hunter when he was asked by the Pioneer Press’ Chris Tomasson whether his “small tweak” comment in training camp was part of gamesmanship in disguising the severity of Hunter’s alleged injury ahead of the Vikings’ season opener against the Packers.

“I’m not going to talk about injuries, Zimmer said, making it clear any follow-ups would be met with the same resistance.

There’s been no announcement from the Vikings of what body part is hampering Hunter, although ESPN’s Courtney Cronin reported a source told her it is a neck-related injury.

She reported earlier in the week that the Vikings are taking a “precautionary approach” with Hunter and that he’s not expected to miss “ample time,” but if he does miss the Packers game it’s simply precautionary.

Pain In His Neck? 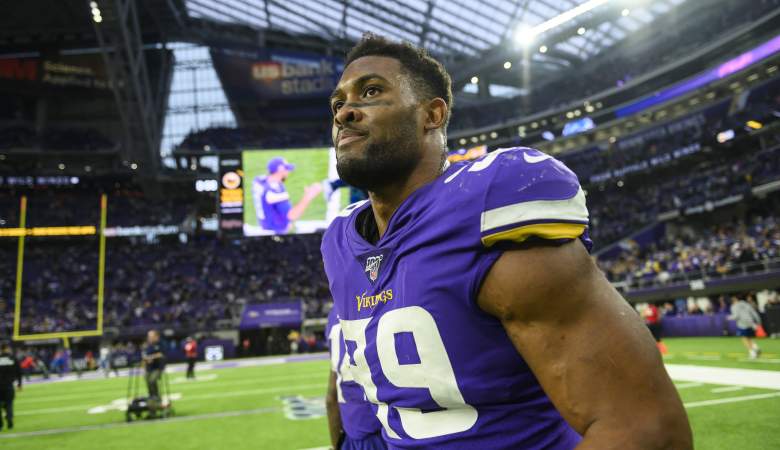 GettyDanielle Hunter was placed on injured reserve and the Vikings have not disclosed his injury yet.

That’s what Pro Football Talk’s Mike Florio speculated after the Vikings made the savvy move of placing Hunter to the IR list on the same day the nature of his injury was expected to be revealed on the team’s injury report — a day reporters had been anticipating after continuous questioning throughout training camp.

Teams are not required to report players on IR to the injury report, leaving Hunter’s condition completely up for question of whether he’s injured at all.

Florio entertained the scenario that if Hunter’s training camp status was a hold out due to unhappiness with his current contract and limiting his action, the Vikings placing him on the IR list was an escalation to hit Hunter where it hurts — his wallet.

Zimmer was then and remains now within his rights to say nothing. However, the broader circumstances and the lack of information justify speculation as to whether Hunter truly has a debilitating injury or whether it really is a “small tweak” through which he’s unwilling to play until his $14.4 million becomes better in line with the $27 million per year that the Chargers are now paying to defensive end Joey Bosa.

With no one saying anything, it’s fair to wonder whether Hunter isn’t happy with his contract, and in turn whether he’s declining to play until he gets a new deal. It’s also fair to wonder whether the Vikings took the stare down to the next level by putting Hunter on IR, wiping out $31,250 per week in per-game roster bonuses and making it harder for him to hit a $500,000 escalator based on 13 sacks and another $500,000 escalator based on two more sacks.

This has been the latest reckless speculation made outside of the Vikings organization as fans and media have been left in the dark.

Cronin spoke on the SKOR North podcast further of the possibility of it being a contract dispute back in late August.

“He did sign a really bad deal three years ago when he was 23,” Cronin said. “Well done, Rob Brzezinski… He outplayed that contract about two years ago. If he is not practicing going into Week 1 and it’s not on the injury report, then that’s a contract thing through and through.”

Hunter signed a five-year $72 million contract with only $16.9 million guaranteed at signing. Hunter has since surpassed his peers as Cronin said that his contract will need to be restructured going forward since he’s emerged as one of the NFL’s top pass-rushing talents.

Next year’s salary cap is expected to take a hit due to less profit in the pandemic season as the business side of the league could show its ugly face in future contract dealings — especially with the Vikings who have several star player contracts coming to an end this season like Dalvin Cook, Anthony Harris and newly acquired edge rusher Yannick Ngakoue.

The one wrinkle missing from the perceived holdout theory is that Hunter’s camp has not leaked any info of his grievances with his current deal to national media as Hunter, still yet to reach his prime, has been amicable throughout his time in Minnesota. 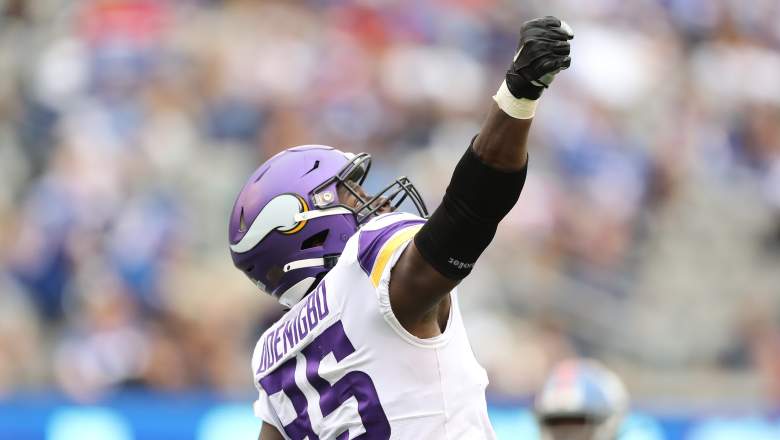 GettyIfeadi Odenigbo could be in line for more playing time in the absence of Hunter.

In Hunter’s absence, Ngakoue and Ifeadi Odenigbo will likely take the reigns as the Vikings starting defensive ends against the Packers.

Odenigbo, named a top breakout candidate of the 2020 season was irked by the acquisition of Ngakoue as his chances of starting at defensive end were simply “fool’s gold,” but it seems he may start at defensive end in Week 1. Odenigbo was thought to take snaps at defensive tackle but was listed as a backup defensive end on the team’s first depth chart.

Jalyn Holmes and Eddie Yarbrough are in line for larger roles if Hunter does miss Week 1, while rookie D.J. Wonnum remains buried at the bottom of the depth chart.

Outside linebacker Anthony Barr could also be in the mix for some reps at rushing the passer, a move that could come with the addition of former Packers defensive coordinator Dom Capers to the Vikings staff.

Shamar Stephen and Jaleel Johnson will start at defensive tackle.