Vikings quarterback Kirk Cousins had one of the worst performances of his career on Sunday against the Colts.

Vikings fans shared collective grief following a loss to the Colts and one of the most embarrassing starts in coach Mike Zimmer’s tenure. Pro Football Focus asked fans to share their best three-word responses to the loss and one fan may have captured the feelings abound perfectly.

I only need 4 letters

There were three common targets of the Vikings fans. Coach Mike Zimmer, general manager Rick Spielman and quarterback Kirk Cousins. All three parties were given contract extensions this offseason as the franchise has invested in their futures with the team.

They just got extended lol not happening

By far the most popular response was many fans calling for the Vikings to enter full-tank mode and take Clemson quarterback, who played in the NCAA national championship game a season ago, with the No. 1 overall pick in next year’s draft.

Another fan called for the Vikings to reinforce their defensive line by signing Damon Harrison, a veteran run-stuffing defensive tackle who remains a free agent two weeks into the season. The call for Harrison isn’t unwarranted as the Vikings run defense has struggled in the first two weeks, including giving up 151 rushing yards against the Colts.

Some fans have remained mindful that the offseason’s mass exodus and integration of their replacements will take time.

Another fan suggested the franchise is beyond repair with an ambitious suggestion that puts the loss of seven starters this offseason to shame.

Faults In The Big Three 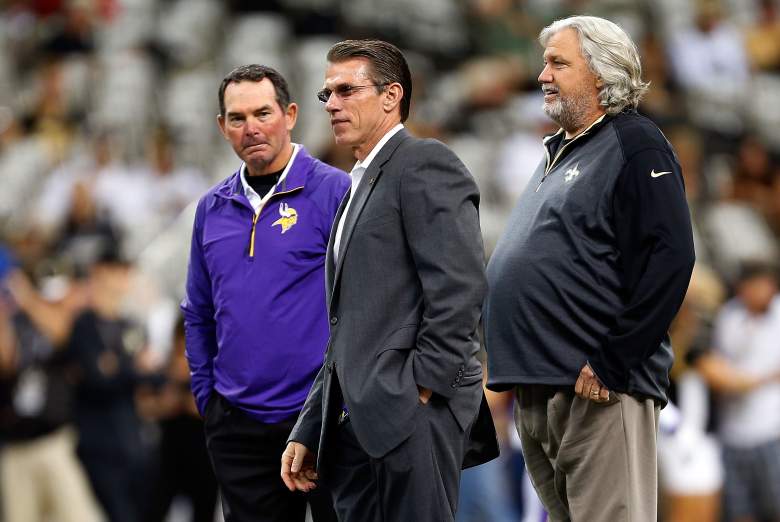 GettySpielman and Zimmer now enter a rebuild of the franchise with high expectations.

Cousins, Zimmer and Spielman all signed multiyear extensions this offseason and all three had expectations of this season that, after two weeks, seemed unrealistic.

Spielman, touted all offseason for assembling the largest draft class in modern draft history, was confident in the rookies’ chances of contributing early. He even traded away Stefon Diggs for more draft capital.

But after two weeks, few rookies drafted beyond the third round have made any contribution. Second-round pick Ezra Cleveland has yet to crack the starting offensive line while Cameron Dantzler, Jeff Gladney and Justin Jefferson’s returns have been minimal as the systems they’ve been plugged in have struggled. The unprecedented offseason has played a role in their progression of the rookie class who did not have rookie minicamps and no preseason. Their progression in the following weeks will draw a clearer picture of how Spielman’s bets have paid off.

Zimmer’s defense which lost five starters this offseason has yet to see its former glory despite the confidence in his coaching staff to ready the replacements amid Pro Bowls talents at each level (although, Danielle Hunter remains on IR as the only true returning starter on the defensive line).

Continuity on offense was one of the Vikings’ biggest strengths this season, yet Cousins, coming off his best season as a pro, unraveled in arguably the worst performance of his career against the Colts, throwing three picks and completing just 11 of 26 passes for no touchdowns. He had a 0.0 passer rating through three quarters and finished with a 15.9 passer rating.

As poor as the Vikings have played the past two games, they lost to the Packers by nine points and were still in both games at halftime. Untimely penalties have crushed the Vikings on both sides of the ball as the defense continues to struggle to get off the field — a piece in their poor performance to start the season.

“I’ve been telling them we can’t start winning until we stop losing and right now we are doing things to beat ourselves with the turnovers and sacks and safeties and penalties on third downs on defense,” Zimmer said. “I’m just not going to deal with it anymore.”

Zimmer’s patience seems to have drawn thin as the Vikings enter Week 3 among the basement of the NFL. There still is plenty of time to turn things around — which Zimmer has done in his tenure with the Vikings before — but expectations have been tempered after an offseason of optimism.