Getty Yannick Ngakoue spoke with Vikings media for the first time since his trade on Sunday.

Yannick Ngakoue got a glimpse of the type of ship Vikings coach Mike Zimmer runs back in 2018.

The Jaguars had joint practices that preseason and Ngakoue took notice of Zimmer’s leadership.

“Coach Zim does a great job of taking care of everybody,” Ngakoue said in his first press conference with the Vikings. “Being able to live in it and absorb the energy in being a player here, I feel like it’s a special place.”

Spending the first four seasons of his career in Jacksonville, Ngakoue was traded to the Vikings last Sunday for a 2021 second-round pick and a 2022 conditional fifth-round pick that could rise in value to a third depending on how Ngakoue’s future with the Vikings unravels.

He ranked second in Jaguars history with 37.5 sacks in his first four seasons and played a hand in five of the Jaguars’ 12 defensive TDs since 2016.

Ngakoue Gave Up Major Money to Come to Minnesota

Ngakoue turned down a one-year franchise tender with the Jaguars worth $17.8 million, instead, holding out through the offseason until he was traded to a new team. He agreed to a $12 million contract, taking nearly a $6 million pay cut to join the Vikings.

“Money was never my drive,” Ngakoue said. “I just needed a fresh start and Minnesota was (the team) that gave me an opportunity to continue to live out my dream.”

He added that the Vikings “came out of the blue” and is appreciative of “Minnesota having faith” in him.

Ngakoue said his dissatisfaction with the Jaguars began when the team could not reach a long-term deal with him. He didn’t disclose if the Vikings assured him that his 2020 pay cut could lead to a long-term deal down the line.

I haven’t really thought about a long-term deal or anything like that,” Ngakoue said.

Hoping to ‘Become Best of the Best’ 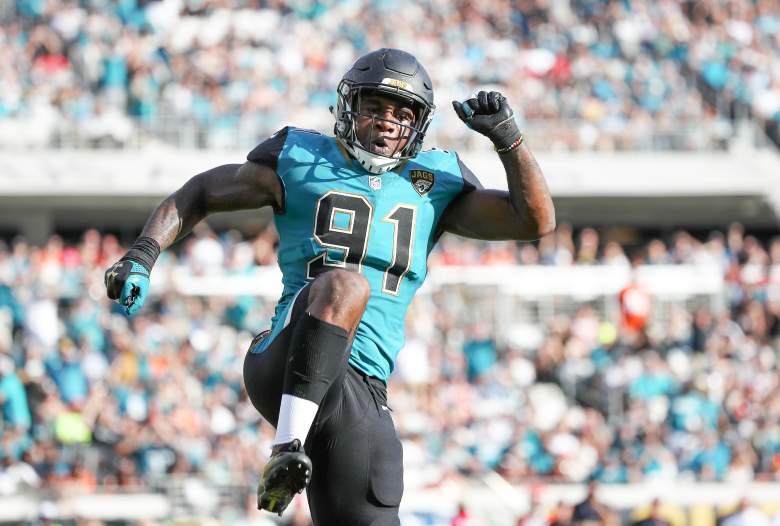 GettyNgakoue has hopes of becoming a Hall-of-Famer.

During Ngakoue’s first walk through TCO Performance Center, he took notice of the photos on the walls of Vikings Hall-of-Famers John Randle, Cris Carter and Randy Moss — a company he said he hopes to join repeatedly in his press conference.

Joining Danielle Hunter to make up one of the league’s best up-and-coming pass-rush duos, Ngakoue, 25, now has one of his most talented peers and the tutelage of Andre Patterson to guide his development.

“When they talk about edge rushers, you want them to talk about Danielle and Yannick,” he said. “I’m just glad that we’re able to be on the same team and we can push each other each and every day. Our friendship will build as time goes on.

Ngakoue, who ranks fourth in the league with 14 forced fumbles since 2016, hopes to continue to be a disruptive force in the backfield.

“Everybody can get sacks, it’s easy. The guys that are special that get gold jackets are the guys that change the game,” he said.  “Forcing a fumble is changing the game, you give your offense another opportunity to score some points.”

Ngakoue, in an effort to preserve his legacy in the NFL, paid defensive lineman Jalyn Holmes for the No. 91 with the Vikings — the same number he wore in Jacksonville.

“I feel like there’s only one No. 91 in this era that can do what I do,” “People know me in this league as No. 91 and I want to continue to have that number until I’m retired.

When asked how much of a hit to his bank account it cost, Ngakoue had a candid moment amid the pressures of his first press conference on his new team.

“Man, you know I can’t disclose that information,” he said with a chuckle. “Not too much, not too much.”