Getty Adrian Peterson may have a new home in the NFL.

Adrian Peterson’s chase for the NFL career rushing record will trudge on.

The former Vikings superstar who won the NFL Most Valuable Player award in 2012 was surprisingly released by Washington on Friday but was picked up by Sunday morning.

As the NFL’s fifth-leading all-time rusher, Peterson, entering his 15th season, now has a chance to surpass Barry Sanders for fourth all-time in the same jersey Sanders wore.

Bevell helped Peterson reach the Pro Bowl in all four seasons they were together as the former No. 7 overall pick in 2007 rushed for at least 1,298 yards and 10 touchdowns each season.

ESPN’s Josina Anderson reported that Peterson told her “they’re giving me an opportunity to play. I know coach (Darell) Bevell from my days in Minnesota. Ultimately I feel comfortable going there and helping them to get better.”

Peterson joins a crowded running back room with Lions who have spent years and several draft picks trying to develop a running game. Peterson will be in the mix with 2018 second-round pick Kerryon Johnson and second-round rookie D’Andre Swift and likely ranks above 2018 seventh-rounder Bo Scarbrough and 2019 sixth-round pick Ty Johnson. 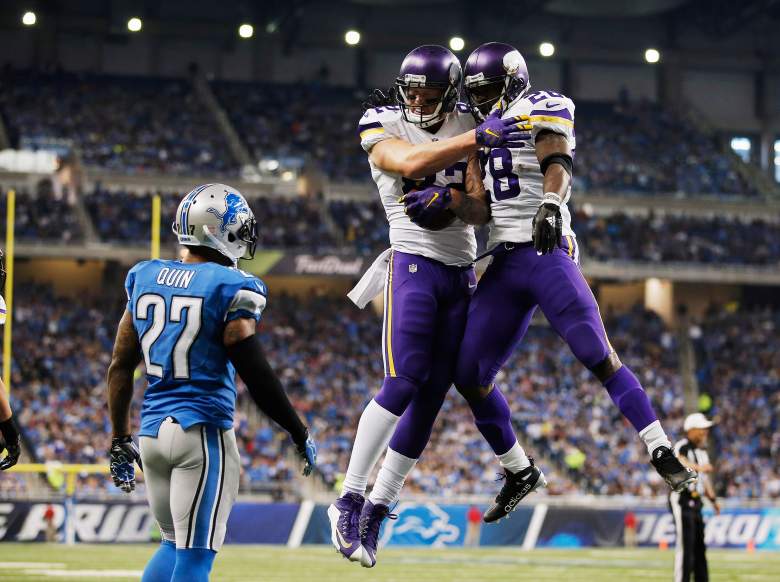 GettyAdrian Peterson will chase Barry Sanders’ rushing record this season with the Lions.

Sanders, who has 15,269 career rushing yards as the league’s fourth-leading rusher of all time, welcomed Peterson Sunday morning via Twitter.

“So excited to see @AdrianPeterson coming to the Lions — It will be great to have you in town,” Sanders tweeted.

So excited to see @AdrianPeterson coming to the @Lions – It will be great to have you in town.

In 2018, Peterson tallied 251 carries for 1,042 rushing yards at the age of 33, spurring a two-year contract extension with Washington. Last season he ran for 898 yards on 211 carries in 15 games, his lowest output in any season he’s played at least 12 games.

He recently said he’d like to play four more years to the age of 40 and his tenure with the Lions will be a proving ground.

While no fans are allowed at games at U.S. Bank Stadium for the first two games, there still is a possibility Peterson and the Vikings will have a reunion in the stadium he helped play a role securing the state.

Peterson’s presence on the Vikings created a resurgence in fandom after a lackluster era through the mid-2000s. The Vikings entertained offers to other cities while the state legislature grappled with a new stadium bill that was eventually signed in 2012.

The first game against the Lions is slated for Nov. 8 at noon, at U.S. Bank Stadium. The Vikings could also have plenty on the line in their Week 17 meeting in Detroit, a game that could likely be flexed to primetime.