Getty Vikings coach Mike Zimmer addressed his future with the team entering what could be his final game in Minnesota.

The Vikings‘ loss to the Packers last week was one of the ugliest games to watch in coach Mike Zimmer’s career — and sports bettors are buying in that the season could get worse.

Zimmer, entering his seventh year as head coach of the franchise and coming off a contract extension, has the fourth-highest odds of being the first head coach fired in the NFL after Week 1, per BetOnline.ag.

The expectations have likely been lowered as the Vikings lost seven starters. amid a pandemic with a truncated offseason. The Vikings gave Zimmer a vote of confidence moving forward by giving him a three-year contract extension.

“We are excited to have Coach Zimmer continue to lead the Minnesota Vikings this season and beyond,” Vikings owner Mark Wilf said in a statement. “We strongly believe in his leadership and the team culture he’s fostered. We look forward to him furthering the team’s success of the previous six seasons and leading us to our ultimate goal of bringing a Super Bowl Championship to Minnesota.”

The Vikings could terminate his contract at any time, although its highly unlikely he’s the first coach to be fired in 2020 if at all. 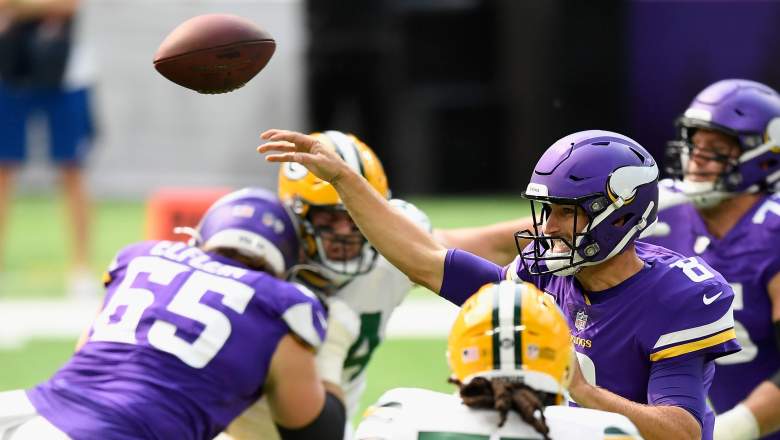 GettyThe Vikings had some bright spots despite a reality check on defense.

Aaron Rodgers’ dismantling of the Vikings defense was reason to cause some panic — the Vikings gave up the second-most total yards (522) and the most points (43) in Zimmer’s tenure.

Through the offensive onslaught, the Vikings came up only nine points shy in a 43-34 loss despite possessing the ball for a franchise-low 18 minutes, 44 seconds, compared to the Packers’ 41 minutes, 16 seconds with the ball.

With starting cornerback Cameron Dantzler and starting right guard Pat Elflein ruled out for Week 2 against the Colts, the Vikings may not have a bounce-back performance that resembles 2019’s playoff team but the offense’s resilience after a second-quarter meltdown shows the Vikings can and will stick with teams this season.

The Vikings will face a Colts team coming off an equally embarrassing loss to the Jaguars, which should be proving grounds for the adjustments coach Zimmer can make.

Zimmer has harped this offseason that the Vikings play complementary football. With a defensive collapse, many of the team’s top performers scored horribly in Pro Football Focus’ Week 1 positional grades.

Eric Kendricks and Harrison Smith were the only two defensive players with at least 10 snaps to have a PFF rating of above 60 — Smith was graded a 70 and Kendricks a 69.9. The Vikings’ defensive line and secondary struggled to pressure Rodgers, producing only seven pressures on 44 dropbacks.

The Vikings’ worst performances on defense are below:

The offense played well as six players graded higher than a 60 on PFF’s scale. The Vikings top offensive performance grades are below:

Loading more stories
wpDiscuz
0
0
Would love your thoughts, please comment.x
()
x
| Reply
The Vikings head coach has some of the best odds of being the first head coach fired in the 2020 season.