Getty The Vikings had some bright spots despite a reality check on defense.

Packers cornerback Jaire Alexander smashed the Vikings‘ gameplan to bits last Sunday, sacking Kirk Cousins in the end zone for a safety and intercepting a pass in the second quarter.

Vikings coach Mike Zimmer spoke to media on Monday after watching the game tape and addressed Alexander’s safety on Cousins which was arguably the game’s biggest momentum shift.

Alexander, looking as if he was anticipating the Vikings to run on their 3-yard line, blitzed to the Vikings’ backfield, running past two receivers and running back Dalvin Cook to smother Cousins on his blindside in the end zone.

.@JaireAlexander gets to Cousins for the sack & the safety! #GBvsMIN | #GoPackGo

The Packers converted a field goal on the ensuing drive and took the lead for good following the play as the defense was deflated after being on the field for 16 of the game’s opening 23 minutes.

Despite the play technically being a misread then a gamble by Alexander, it became the perfect storm for the Packers to take the lead.

‘He Didn’t Seem Him’ 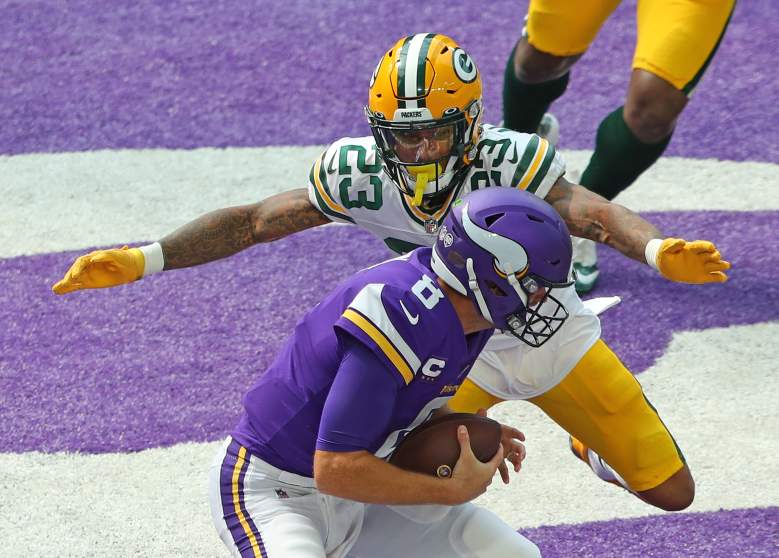 Zimmer admitted there was a miscue on the play but didn’t point the finger as to who was responsible for Alexander.

“What I was told was that the corner thought it was a run so he just kept coming, but we have a guy responsible for him, but I’m not going to mention who it would be. And he didn’t see him,” Zimmer said in a press conference on Monday.

ESPN’s Courtney Cronin speculated that Adam Thielen could have been responsible for chipping Alexander or cutting his route short as he ran alongside Irv Smith Jr. up the middle on the play.

Thielen was sent in motion and that probably tipped off Alexander that it wasn't going to be a run play, though it's possible he should've chipped or break quickly off his route. Short motion, deep PA drop. Probably changed the CB's perception on what was about to happen. https://t.co/uk0ASof0v6

Alexander told Wisconsin State Journal that he did read it was a run play when Thielen was set in motion.

“I was anticipating run because of the motion by Thielen. So once I anticipated run, I shot my shot,” Alexander said. “And when I saw it wasn’t a run, it was too late to turn back. So I just kept going.”

Thielen likely would have drawn Alexander on a deep route that would create space underneath across the field.

While Zimmer didn’t point the finger as the Vikings are moving onto their Week 2 matchup against the Colts, fans have speculated other possibilities on the play.

One fan made the point that with Alexander out of coverage and the Packers linebackers likely anticipating the run as well, both Thielen and Smith Jr. open, Cousins should have made the throw to his blindside, which would have likely been beyond his first read across the field.

Can Cousins make that throw? pic.twitter.com/ICiNKrjXel

Thielen and Smith Jr. running together upfield on a play that called for a short pass suggests that potentially one of the two should have broken off their routes.

My guess is either the TE (most likely) who had a clean release or AT (less likely) was responsible to chip a blitzing corner. In a blitz situation they don’t need that many WR’s running open. We actually had guys wide open in same area.

Cook, selling the play-fake, goes up the middle and ends up double-teaming a Packers defensive lineman with guard Dakota Dozier. One fan suggested Cook should have slid to pick up Alexander.

Watch Cook. He doubles with Dozier, he needs to pick up Alexander. Cousins needs to read that pre snap as well. Vikings ran similar blitz later, Rodgers saw it, threw to hot read.

Overall, the play represents some of the tricky nuances of executing in-game as teams can only simulate so much in practice.

Feel like that was just a perfect storm of a play. Even rewatching, it’s hard to see who could’ve picked him up without letting someone else go. Just a perfect representation of the game