The NFL’s national talking heads pegged Vikings rookie Justin Jefferson as a replacement to Stefon Diggs after the team traded the former Minneapolis Miracle star to the Bills and used the first-round pick they received to draft Jefferson.

Jefferson’s aptitude from playing in a pro-style offense and winning a national championship at LSU was evidence he could make a splash in his rookie season, recognized as a top Offensive Rookie of the Year candidate.

But after news that Jefferson hasn’t taken dominion at the No. 2 wide receiver spot to start the season — claimed by Bisi Johnson instead — Bleacher Report has written Jefferson off as one of the NFL’s biggest training camps’ losers.

Kristopher Knox wrote that while he’s not suggesting Jefferson won’t have an impressive season, Johnson’s emergence as the team’s No. 2 wide receiver in training camp, knocking Jefferson down a few rungs in the offense’s pecking order.

He’s flashed plenty of physical ability in camp and is playing with a quarterback in Kirk Cousins who passed for 26 touchdowns and just six interceptions last season.

However, Jefferson theoretically had an opportunity to replace the departed Stefon Diggs as Cousins’ top target. Instead, it appears he will be the third receiver behind Adam Thielen and Olabisi Johnson.

“While Jefferson is capable of spectacular plays, he hasn’t shined against the second-team defense quite as much as you’d expect,” The Athletic’s Chad Graff wrote. “His future is still plenty bright. But it’s not a given that he’s the No. 2 wide receiver Week 1.”

In a run-oriented offense that features plenty of tight ends Kyle Rudolph and Irv Smith Jr. in the passing game, Jefferson might not play a prominent role out of the gate.

Jefferson has made several dazzling catches throughout training camp but without rookie OTAs, a less than hands-on virtual offseason and missing the first two weeks of training camp — largely conditioning work — his development hasn’t quite opened up to its potential yet. Expect the regular season to accelerate his growth into an NFL wideout.

Additionally, as much of a knock to Jefferson Knox’s take might be, national media has yet to recognize Johnson who could make major strides in his second season.

Kirk Cousins told KFAN that he thinks Johnson “has had one of the best training camps of anyone on the team,” as Johnson’s looking improved from his rookie campaign. Johnson posted a 119.4 passer rating when targeted last season, which ranked fifth among rookies.

Why Jefferson Can Still Shine 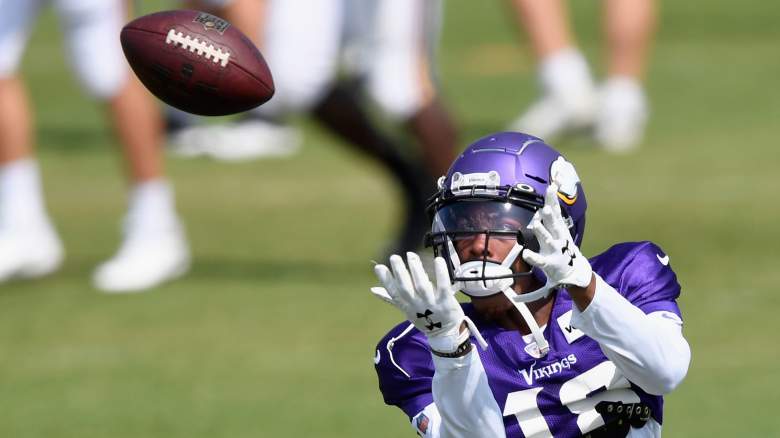 The running notion that the Vikings don’t play many three-wide receiver sets does hold ground. The Vikings ran the least plays out of the 11 personnel package (1 RB, 1 TE, 3 WRs) in the NFL, just 201 snaps compared to the league average of 605, per Sharp Football. Just 22 percent of the Vikings’ plays came out of this set — the most popular personnel package in the NFL — as the Vikings have bucked the modern NFL offense and reverted to heavy sets and a zone running scheme.

The Vikings shifted further from three-wide receiver sets progressively throughout 2019, but also were the most efficient team when using three wide receivers, averaging a league-best 8.4 yards per pass attempt and a fifth-highest 5.4 yards per carry.

Running out of the 12 personnel package (1 RB, 2 TEs, 2 WRs) the second-highest total in the NFL, per The Daily Norseman, the Vikings passed the ball 66 percent of the time out of this set but were less effective, averaging 7.6 yards per passing attempt and 4.0 yards per rushing attempt.

The move to more 12 personnel sets came when Adam Thielen went down with an injury as Johnson, a seventh-round rookie, was thrust into the No. 2 role. The Vikings are much deeper at wide receiver this season with Jefferson and Johnson entering his second season, which could encourage Kubiak to run more three-wide receiver sets.

Even if Jefferson doesn’t move into the No. 2 role this season, what he’s shown in training camp is enough to warrant plenty of playing time.

Cousins told ESPN that the team is looking to find Jefferson’s comfort zone early this season and to get him more reps.

“Learning the plays takes time no matter how good you are but when the instincts can take over and you can make great plays, that’s what you’re looking for,” Cousins said of Jefferson, via ESPN. “He’s shown an ability to do that so we have to continue to get more reps, get more plays together, find out where he’s most comfortable and certainly keep him in that comfort zone early in the season.”