Getty Adrian Peterson was arrested on Sunday, February 13 on a charge of family domestic assault.

Vikings running back Dalvin Cook’s performance the past two games has catapulted the 25-year-old running back into Most Valuable Player conversations often dominated by quarterbacks.

Cook has racked up 478 yards and six touchdowns, claiming back-to-back NFC Offensive Player of the Week honors in the process.

Adrian Peterson, the last running back to win the award back in 2012, has taken matters personally that the league continues to sleep on Cook. Peterson has taken to social media to advocate for his successor in the Vikings backfield, most recently calling out Electronic Sports’ Madden 21 to “boost” Cook’s rating.

Boost his rating up @EAMaddenNFL

Madden raised Cook’s rating of 95 to 96 as the league’s second-highest rated running back behind the Carolina Panthers‘ Christian McCaffrey.

“I’m with you all the way,” Ochocinco said to Peterson. “What he’s doing is phenomenal.”

Peterson responded for video, appreciative of Ochocinco, saying “someone get my guy @ochocinco”free McDonald’s for life,” as Ochocinco has abided by a McDonald’s diet throughout his playing career. 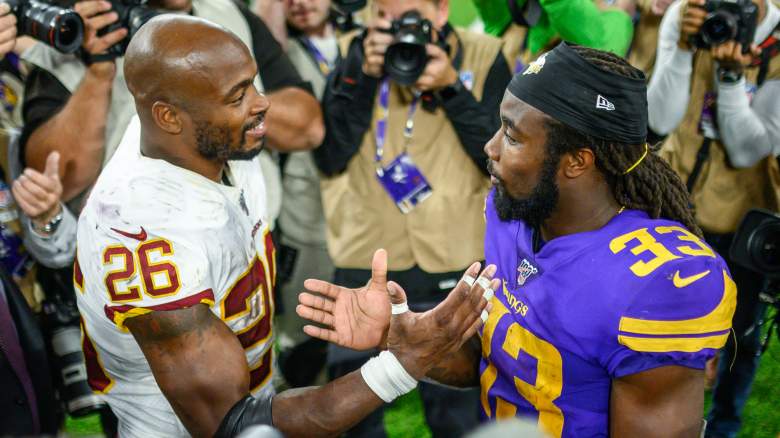 GettyPeterson has supported Cook from a distance since Cook entered the league in 2017.

Before the Vikings’ 34-20 victory over the Detroit Lions last Sunday, Peterson called Cook a “lethal weapon.”

Cook basked in a moment of flattery before redirecting his appreciation to Peterson.

“Yeah, that makes me feel great. I can’t say enough about [Peterson]” Cook said.  “If he hears this or if he don’t [sic], I’m just glad that I got a chance to watch him growing up as a young kid and to see that it was something special for me. He don’t know how much he impacted my career as far as a running back.”

“I appreciate him for everything and just for being my big brother. All Day keep doing you man and I appreciate it,” Cook added.

The two running backs never played on the same team as the Vikings released Peterson months before Cook was drafted in the second round of the 2017 NFL Draft. They’ve crossed paths three times since Cook entered the league.

Peterson, who has since moved on from the team that drafted him and will likely carry their name into the Pro Football Hall of Fame, has worn different colors each of the meetings with the New Orleans Saints, the Washington Football Team and most recently the Lions.

They’ll meet for a fourth time in Week 17 when the Vikings face the Lions on the road.

Loading more stories
wpDiscuz
0
0
Would love your thoughts, please comment.x
()
x
| Reply
The future Vikings Hall of Famer has an issue with his successor‘s Madden 21 rating.