Getty Anthony Harris has joined the many veteran players reported on the trade block ahead of the deadline on Tuesday, Nov. 3.

Vikings safety Anthony Harris led the league with six interceptions last season in a breakout campaign for the seventh-year veteran.

But amid what NBC Al Michael’s characterized as the Vikings’ “salary cap hell,” Harris has become the latest veteran on the Vikings roster being fed to the trade market.

Sports Illustrated’s Albert Breer reported on Oct. 29 that Harris has joined the many names added to the team’s availability list ahead of the Nov. 3 trade deadline.

Fellow starting safety, Harrison Smith, a five-time Pro Bowler and All-Pro mention in 2017, was reported on the trade block as the Vikings are “very open” to trading him, Kyle Rudolph and Riley Reiff, per CBS Sports’ Jason La Canfora. Mike DePrisco followed up on La Canfora’s report and found that veteran wide receiver Adam Thielen has also garnered attention from buyers.

While the Vikings have serviceable replacements if any of the other veterans do leave, it was touted all offseason that Harris and Smith would anchor the secondary this season while the team developed a young cornerbacks group. The duo was named Pro Football Focus’ top safety tandem of 2019 and ahead of the 2020 season.

Neither safeties’ trade rumors have seen any development on specific teams interested, however, that could change by Tuesday’s trade deadline.

Harris, who was franchise-tagged this past offseason, was considered to be on the trade block during the offseason as the team was looking to clear cap space to re-sign Dalvin Cook. Coach Mike Zimmer did not adamantly push back against the possibility of Harris leaving during the offseason.

“I love Anthony. If he doesn’t come back,  think he’s earned everything he’s got,” Zimmer said regarding Harris leading the league in interceptions last season, per Andrew Krammer. “But if you put up the position most important on defense it’s probably not going to be safety.”

Harris will become a free agent this season and, considering the salary cap may plummet for the 2021 season due to lost revenues in the pandemic season, the Vikings may be ready to part ways with him as they entertain options to get under the cap.

Smith is under contract for another season as the Vikings continue to dig themselves out of a financial hole, he could be poised for an extension next season.

Rumor Updates on Other Vets 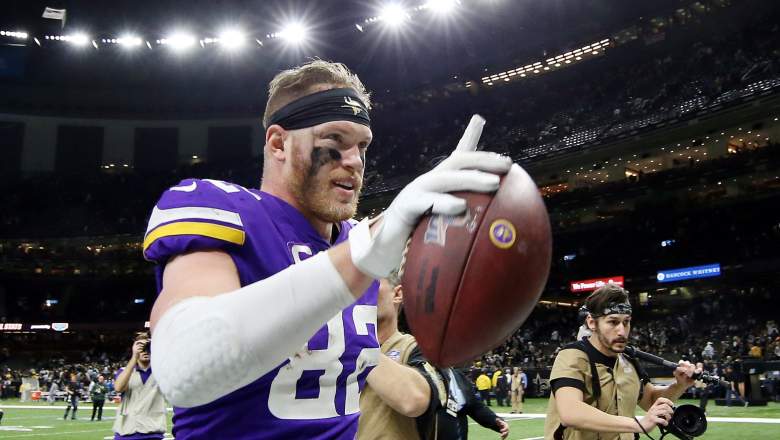 GettyKyle Rudolph addressed the rumors surrounding his and other veterans’ potential to be traded.

Thielen’s name was at the table when the Vikings traded Yannick Ngakoue to the Ravens for a third-round pick and a conditional fifth-rounder during the bye week. While that trade could still be in play despite the Ngakoue deal being finalized, it seems unlikely the Vikings would part ways with Thielen.

One NFL insider said a Vikings coach “openly laughed at the suggestion” of trading Thielen to the Browns, another team seeking a veteran wide receiver after Odell Beckham Jr. suffered a season-ending ACL injury.

La Canfora reported that the Vikings have been pushing Rudolph in trade talks but many teams have instead inquired about his protegé, Irv Smith Jr.

“They try to push Rudolph but the guy we want is (Irv) Smith,” one GM told La Canfora. “They don’t want to trade the young guys. But, yeah, they will push out more salary if they can.”

Rudolph recently addressed the trade rumors surrounding him, saying he has “complete faith” in Rick Spielman.
“That’s the way things go. When you don’t win football games everybody’s job is on the line. That’s the nature of our business,” Rudolph told CBS Sports’ Jeff Kerr. If you’re not performing, if you’re not winning football games, then everybody has to look at themselves in the mirror and your job is always at risk.”
Riley Reiff has been the least discussed veteran up for trade despite an impressive season so far for the veteran left tackle. He has given up only five pressures this season and is fourth among tackles in pass-block efficiency, per PFF.

Read More
Football, Minnesota Vikings, NFL
No one is safe...