Vikings running back Dalvin Cook underwent an MRI on Monday for a groin injury he suffered in the second half against the Seahawks last Sunday.

Cook, who left the field and returned for one play before being held out on the sidelines in Seattle, appears to have avoided a serious injury.

“It went pretty well,’” coach Mike Zimmer said of Cook’s MRI results. “So, we’ll see how he does this week.”

Despite Zimmer’s statement, Cook is reported to be out against the Falcons this week with an adductor strain, per the Athletic’s Chad Graff. This move is likely to give Cook extra rest as the Vikings enter their bye week after hosting the Falcons on Sunday.

Cook is the NFL’s leading rusher with 489 rushing yards and seven touchdowns in five games this season. Cook has taken the league’s third-most carries (92) of any running back and has 12 catches on 16 targets. 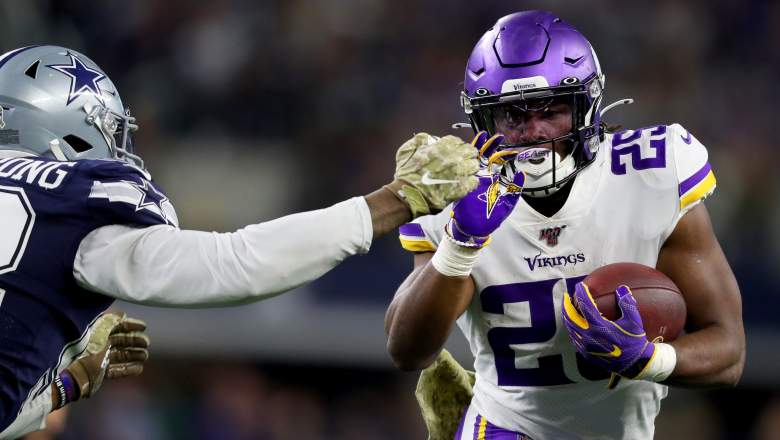 GettyAlexander Mattison could be poised to replace Dalvin Cook as the Vikings’ starting running back.

With Cook unofficially ruled out of Sunday’s game, second-year backup Alexander Mattison will be in line for lead-back duties. Mattison proved to be a more than serviceable replacement, rushing for 112 yards on 20 carries and catching three passes for 24 yards against the Seahawks.

His big day was overshadowed by his final carry of the game, where he was stopped short of a first down on fourth-and-inches, leading to the Seahawks’ final game-winning drive in the final two minutes of the game.

Zimmer reiterated on Monday that he has no regrets on the play call.

“We had a half a yard to go and we’d been running the ball really well. I felt like their defense was tired and we had hit two other fourth downs earlier in the ball game. So, I’ll do it again the next time it comes up,” he said. “If we’ve got a chance to win the game, you’ve got to go for it.”

Mattison will become the latest first- or second-year player to crack the Vikings starting lineup amid a turbulent season.

Justin Jefferson remains one of the NFL’s most sensational rookies after two 100-plus yard games in Week 3 and Week 4. Jefferson came back down to earth against the Seahawks, catching three passes for 23 yards.

Rookie cornerbacks Jeff Gladney and Cameron Dantzler made their second dual-start against the Seahawks and out-snapped veteran Mike Hughes, who was slated as the nickel cornerback, 54 to 43.

Fourth-round defensive tackle James Lynch made his NFL debut in Seattle and made the most of his eight snaps by tallying his first career sack on Russell  Wilson. Lynch is the first Vikings interior lineman to notch a sack this season and joins rookie defensive end D.J. Wonnum who sacked Texans quarterback Deshaun Watson in Week 4.

The calls for second-round pick Ezra Cleveland to be moved to the starting offensive line have escalated as right guard Dru Samia has struggled this season and was exploited against the Seahawks. Samia is currently rated the worst offensive guard in the NFL, per Tomasson.

Loading more stories
wpDiscuz
0
0
Would love your thoughts, please comment.x
()
x
| Reply
The Vikings have made a decision on Cook's Week 6 status.