Getty Danielle Hunter faces an ultimatum with the Vikings after his contract restructure this week.

Vikings Pro Bowl defensive Danielle Hunter sat out the entirety of team practices at training camp with what coach Mike Zimmer called a “little tweak” at the time.

Hunter’s designation to the injured reserve list, requiring him to miss the first three weeks of the season, came as a shock to fans and pundits alike. Now, what was once a small tweak could be a season-long concern as Hunter’s return is nowhere in sight.

NFL Network’s Tom Pelissero tweeted Sunday morning that Hunter’s injury is a herniated disc in his neck, and although he is eligible to return this week, he’s unlikely to be “ready to play.”

“Hunter is regaining strength and getting closer to returning from what sources say is a herniated disc in his neck, though he’s unlikely to be ready to play when he’s eligible to come off IR next week,” Pelissero said. “Optimism still high that he’s back this season.”

Pelissero’s report puts Hunter’s status to return against the Texans likely out of question as his timetable to return will stretch beyond Week 4.

The 25-year-old is the youngest NFL player to reach 50 career sacks and the latest Vikings edge rusher who began their career as a later-round draft pick and emerge as an NFL star.  He posted 14.5 sacks in each of the past two years, earning Pro Bowl nods in both 2018 and 2019.

His absence has been a major concern for the Vikings defense that has struggled to pressure the quarterback this season and given up the most points (102) and yards (1,320) in the team’s 60-year history.

Team Leaders Remain In the Dark On Hunter’s Status

Zimmer was asked in his Monday press conference whether Hunter could return soon now that he is eligible to be taken off the injured reserve list. His response, like many throughout Hunter’s absence, was hands-off as the 56-year-old coach detests speaking upon injuries.

“I don’t know. Whenever the doctors tell me he can,” Zimmer said.

General manager Rick Spielman spoke on Sirius XM radio on Sept. 10, the day after Hunter landed on the list, and said “I think we’re very optimistic and we’ll see how it plays out that Danielle hopefully will be able to be back after the three weeks. But we’ll reassess where we’re at (then).”

After three weeks, the answer remains unclear when the Vikings will get their most important piece on defense back amid a frustrating start to the season. 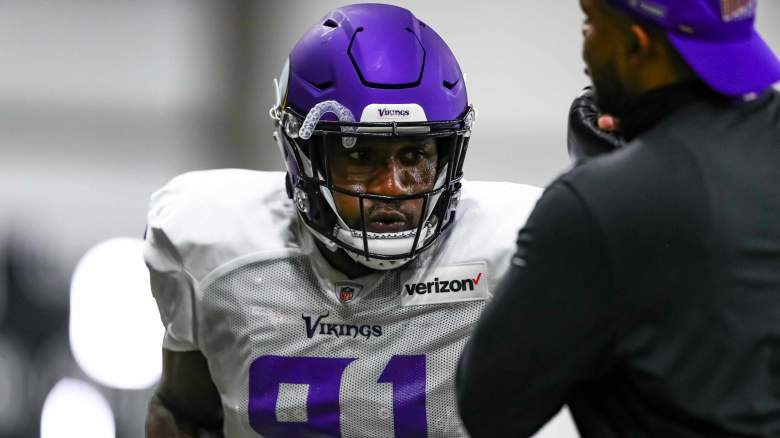 Courtesy of Minnesota VikingsVikings defensive end Yannick Ngakoue has two sacks in his past two games.

Newly acquired defensive end Yannick Ngakoue, who the Vikings traded two draft picks for the Pro Bowler, has progressed in his three games with the team.

After initially failing to register a single pressure against the Packers, Ngakoue registered a strip sack on the Colts’ Phillip Rivers in Week 2. He forced another fumble by sacking Titans quarterback Ryan Tannehill on Sunday and also had a tackle for a loss.

He is currently the only lineman with a sack this season, although fellow starting defensive end Ifeadi Odengibo had four quarterbacks hits against the Titans. Odenigbo was named the 2020 season’s No. 1 breakout player by ESPN but has yet to become a consistent force in the pass-rush this season.

Loading more stories
wpDiscuz
0
0
Would love your thoughts, please comment.x
()
x
| Reply
What was once a "little tweak" could be a season-long concern as Hunter's return is nowhere in sight.