Getty It's unlikely Smith threw intentional shade at the Vikings.

Vikings coach Mike Zimmer was livid on Sunday when All-Pro safety Harrison Smith was ejected for helmet-to-helmet contact against the Texans. The Vikings escaped with a win despite losing their most decorated and veteran player on defense.

It was suspected that Smith could face suspension for the hit and potentially miss the Vikings’ primetime matchup against the Seahawks on Sunday. NFL Network’s Tom Pelissero put that fever dream to rest Monday morning.

“#Vikings star safety Harrison Smith isn’t expected to be suspended for the hit that got him ejected Sunday against the #Texans, I’m told. Mike Zimmer was livid over the ejection. Minnesota escaped with a win, and Smith should be back for next week’s big game at Seattle,” Pelissero tweeted.

Smith pursued Texans tight end Jordan Akins who caught a pass over the middle and braced for a hit. Smith had already launched for Akins, who tucked his head, as the two collided helmet-to-helmet. Smith was called for helmet-to-helmet contact and was ejected, while Akins left the game with a concussion.

Zimmer showed an understanding in the circumstances of the play, but to pin Smith’s intentions as malicious was an overstep by the NFL.

“I love Harrison Smith like he’s my son… QBs can throw over the middle of the field with no repercussions whatsoever,” Zimmer said. “I thought Harrison tried to lead with his shoulder. If you want to give him a penalty, give him a penalty, but don’t eject him. He’s not a dirty player.”

Unless the NFL has a change of heart, it appears Smith, who has never missed a game to suspension in his nine-year career, will be active against the Seahawks. 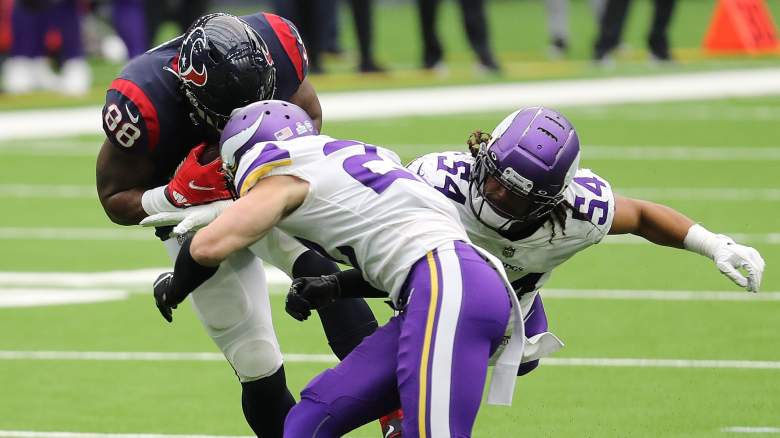 GettyThe call on the field determined the NFL’s ability to overturn the ejection.

NFL Senior Vice President of Officiating Al Riveron was asked to address why Smith was ejected after the game.

His response indicated that the ruling on the field played a factor in the ability for the officials in New York to overturn the play.

Former Vikings safety Andrew Sendejo was suspended for a game in 2017 for a similar hit on Ravens wide receiver Mike Wallace.

The Vikings secondary was shorthanded on Sunday with cornerbacks Mike Hughes and Kris Boyd out. Veteran safety George Iloka had prepped all week to backup the nickel cornerback spot, but instead was thrust into replacing Smith.

Iloka was targeted by the Texans who keyed on him for a fourth-quarter touchdown to Kenny Stills that brought the Texans within a possession. He redeemed himself by tackling running back David Johnson who fumbled a pitch inside the 10-yard line on the Texans’ final possession, setting up the Texans fourth-down pass attempt to Will Fuller V that was ruled incomplete.

Zimmer said after the game that he had to approach Iloka on the sideline to replace Smith on the fly.

“I did see a couple (mistakes) there,” Zimmer said of Iloka’s play. “He was preparing most of the week at nickel and so I had to actually ask him on the sidelines if he knows what he’s doing at safety.”