Both Michigan State recruits over a decade ago, the quarterbacks slated to face off on Monday Night Football competed for a job as a backup behind Spartans starter Brian Hoyer from 2007 to 2008.

Foles, a gargantuan 6-foot-6, 240-pound southern Texas prospect that broke Drew Brees’ passing records in high school, was the favorite ahead of Cousins, who was undersized at 170 pounds and unrecruited at the Division I level.

The pair each had their moments in making a case for the job, but Foles eventually transferred to Arizona and became a three-year starter, leaving Cousins to beat out prized-Michigan quarterback Keith Nichol for the starting job after Hoyer graduated.

Cousins, who had a lesser value coming out of college, has gone on to earn the richest contract in NFL history with the Vikings as a franchise quarterback. Foles, on the other hand, has been a journeyman throughout his career, serving as a backup for several seasons, but has a won Super Bowl ring and MVP honors — exactly what Cousins is after.

The Athletic’s Chadd Graff recounted several memories of their time in East Lansing.

Cousins Almost ‘Turned in His Helmet’ 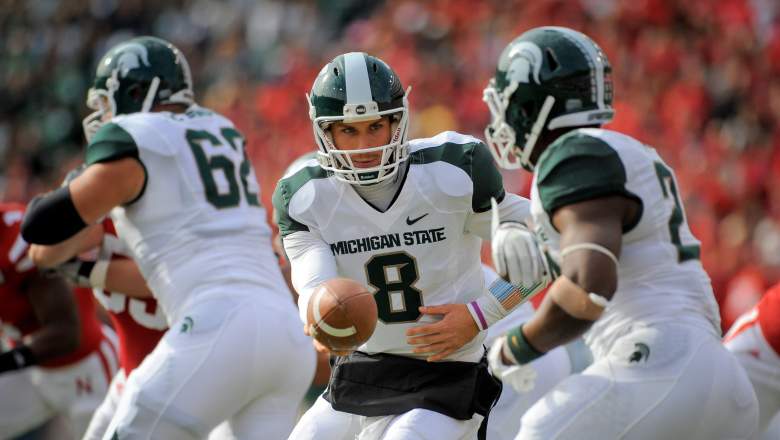 GettyGraff unearthed a story of Cousins‘ where he feared he nearly lost his backup role at Michigan State during his freshman year.

Javon Ringer, the Spartans’ best player and a Heisman candidate running back, was running a seam up the middle of the field during spring practice in 2007. Cousins floated a pass to Ringer that had a little too much air under it, Graff detailed.

Ringer, not giving up on the play, crashed into the goalpost and was knocked flat onto his back, provoking an eerie silence that overcame the Spartans practice in fear Ringer may have seriously injured himself.

“Javon, being Javon, went after the ball with everything he had and went right into the goal post,” Cousins said. “Fortunately, he got right back up, but I did say to the coaches that if he had stayed down there, I would’ve just turned in my helmet and gotten back in my car and driven back from East Lansing back to my hometown and said, ‘I’m done.’ So I was glad that he got right back up and that the field goal post was forgiving.”

Cousins was motivated to beat out Foles, who was slightly ahead of Cousins on the depth chart and carried a spark with him throughout his time at Michigan State. Cousins recruited offensive linemen to go out with him after games on Saturdays to lift weights and eat endlessly at the dining hall, Graff reported.

“That’s 100 percent true,” Ringer told Graff. “That is not an exaggeration at all. He really wanted to get some size on him.”

In the spring of 2008, Ringer was picking his team for the spring game and chose Cousins over Foles despite the latter playing a game in 2007 and Cousins still buried beneath Foles and Hoyer.

Cousins completed 12 of 19 passes for 196 yards and a touchdown as his team, with Ringer, won the spring game. He showed his fire when he spiked a ball on a 14-yard scramble, Graff said.

“Even as a little freshman, he was a little firecracker,” Ringer added. “He was one of those guys to get you fired up and pumped. This is just my opinion, but Kirk was more, I don’t know, something about him was more fiery. And just for my particular taste, that’s what I liked. So I wanted Kirk. I spoke strongly about Kirk.”

Both Foles and Kirk seemed to be gaining steam in their cases to succeed Hoyer following the 2008 spring game.

Nichol, who was committed to Oklahoma, lost out on a starting job to Sam Bradford and eventually transferred to the Spartans that spring. Foles announced his transfer to Arizona a day later, leading to Cousins beating out Nichol for the starting job.