The Vikings entered Week 6 against the Falcons knowing it wasn’t going to be a gimme. But after encouraging signs from the offense that was extending drives and showing balance, Kirk Cousins came out with a dud from the onset that set the tone for the rest of the game.

Matching his 2019 total of seven interceptions in 17 games just seconds into the sixth game this season, Cousins threw a pair of interceptions to end the first half as the Falcons took a 20-point lead into the intermission. The Vikings couldn’t cut the difference, losing 40-23 on Sunday.

“The first (interception) was the worst one,” Cousins said after the game. “The coverage was not confusing… I simply forced the football into coverage — you know, tried to do too much. That’s a mistake I may have made in Year 1. It was very disappointing I would do that now.”

‘I Won’t Finish the Season’

After a pair of three-and-outs and a drive that stalled on the Falcons 3-yard line, Cousins’ pair of second-quarter interceptions resulted in 10 points scored off turnovers. Cousins took responsibility and entertained the possibility of him being benched.

“You just have to play well in this business. The reality is if the pace that I’m on — in terms of the interceptions —  if that were to continue I won’t finish the season,” Cousins admitted. “Whether it’s them telling me ‘hey you gotta improve’ or them pulling me, you gotta get better. That’ll be what the rest of the season will be about for me, trying to protect the football as best I can.”

Cousins completed 7 of 10 passes for 95 yards and a touchdown pass to rookie Justin Jefferson in the third quarter while the game was still seemingly in reach. Cousins’ second-half stat-padding produced a final line of 24 of 36 for 343 yards, three touchdowns and three interceptions. He leads the NFL with 10 interceptions on the season.

The Falcons became the third time in coach Mike Zimmer’s tenure with the Vikings to score 40 or more points. The Packers did the same in this year’s season-opener in a 43-34 decision.

Zimmer seemed disillusioned by the loss, calling it “strange” after several weeks of improvement from the team.

“I thought we had a good week of practice. We talked about being better coming out of the locker room, then we throw an interception on the first play in the game,” he said. “It’s just strange.”

Despite Cousins’ turnovers on Sunday, when asked if there was any consideration to bench him, Zimmer responded bluntly, “no.”

But entering the bye week with a 1-5 record, change is needed.

Bench Kirk? Fire Zim? Take the playbook out of offensive coordinator Gary Kubiak’s hands? There’s plenty of finger-pointing going around, and yet none seem to be a clear-cut answer to the Vikings’ worst start since 2013. 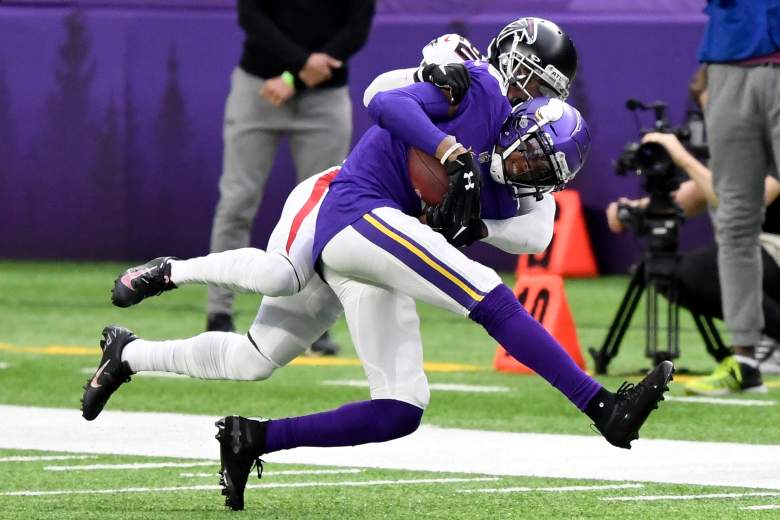 Justin Jefferson is ahead of Randy Moss’ rookie season in terms of yards following his 166-yard outing on Sunday.

Even before garbage time in the fourth quarter, Jefferson was already having an impressive outing. He finished the game with nine catches for 166 yards and two TDs in his third 100-plus-yard performance, a consolation for what was an abysmal outing for the Vikings offense.

Jefferson’s 536 receiving yards this season is third in the league along with his 19.7 yards-per-catch rate following the first slot of games on Sunday.

Loading more stories
wpDiscuz
0
0
Would love your thoughts, please comment.x
()
x
| Reply
Cousins had some telling words about his decline this season.