Vikings wide receiver Justin Jefferson has emerged as one of the league’s most impressive rookie talents, and one of the greatest athletes of all time has taken notice.

Michael Jordan, who watched the Vikings “nearly every week” with ex-Vikings star wideout Ahmad Rashad. Rashad said the NBA legend has taken a liking to Jefferson.

“He said, ‘That kid’s got a lot of talent,’ ” Rashad told Pioneer Press reporter Chris Tomasson. “He’s certainly impressed by that kid.”

On Wednesday, Tomasson spilled to Jefferson what Jordan had said, through Rashad, which caught the rookie in a moment of giddiness.

“It’s a great honor, to be honest,” Jefferson said. “My dad loves (Jordan). My dad was a basketball player who watched him a lot, so it’s an honor to hear that from him.”

Here’s Jefferson’s live reaction to the comments two minutes into his press conference.

LIVE: @JJettas2 chats with the media about Sunday's game against Detroit https://t.co/yQ0l4Ogeod

Despite the high praise from Jordan, Jefferson was not willing to switch over to the Jordan camp in the ongoing Lebron James versus Jordan debate.

“LeBron James, 100 percent,” Jefferson answered. “I’m a die-hard LeBron James fan. Wherever LeBron goes, I’m going. We won a championship this year (with the Lakers), so I’m very happy for my guy… He’s a machine. He can’t be stopped.”

Rashad has become an NBA legend in his own right as a broadcaster after an illustrious NFL career that was highlighted by four Pro Bowl appearances. Rashad echoed his impression of Jefferson to Tomasson.

“This kid has a chance to be a big star,” Rashad said. “He’s just got to keep going. That’s the start. He has a lot of potential to be a great player.”

Jefferson  On Historic Pace, Carries Himself Like a Vet 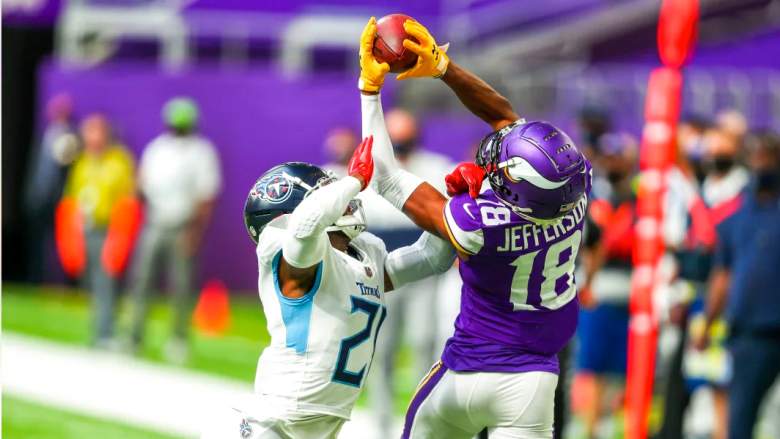 Courtesy of VikingsJustin Jefferson has had the fourth-most prolific start to a season of any rookie wide receiver since 1970.

Drafted No. 22 overall last April, expectations of Jefferson were steep as he was pegged as Stefon Diggs’ replacement on a team that had high hopes of returning to the playoffs.

Those expectations were tempered when Jefferson was slowly introduced this season, making his first start three games into the season. Despite the Vikings kicking the training wheels off later than most would have liked, Jefferson has put together a historic start to the season, catching 31 passes for 563 yards in seven games and five starts this season.

He is on pace to finish the season with 71 catches for 1,286 yards, which puts him in the realm of surpassing Randy Moss’ 1998 rookie season where the Hall of Famer caught 69 passes for 1,313 yards.

Jefferson maintained that he has carried himself like a veteran since the day he was drafted.

“To be honest, I’ve never really looked at it as me being the rookie, the new guy,” Jefferson said. “I always try to take everything like a veteran takes it. I’m new to the league, but I try to have the mindset of a veteran, be professional, and be on my P’s and Q’s.”