Getty ESPN called out Mike Zimmer and the Vikings' philosophy of team building.

Vikings coach Mike Zimmer was not shy about the Vikings’ second-half collapse against on Sunday against the Titans. A missed field goal and an aborted snap on the game’s final drive proved to be back-breakers in a 31-30 loss.

“I thought we competed today but we made too many mistakes to win,” Zimmer said. “I have to figure out is how to get this team to understand what’s causing them to lose.”

After Titans kicker Stephen Gostkowski converted a career-high sixth field goal to give his team the lead, the Vikings had 1 minute, 44 seconds left in the game to bring the ball within field-goal range and give kicker Dan Bailey a chance at redemption after he missed a 49-yard field goal in the third quarter.

On 2nd and 10, center Garrett Bradbury snapped the ball before the rest offense was set, sending Kirk Cousins scrambling ball to fall on it for a 14-yard loss and ultimately killing any chance of a game-winning drive.

“The last possession — when you got a chance to go down and win the game with a field goal — is a complete disaster,” Zimmer said.

Zimmer Not Satisfied With Career Day From Cook

Despite Dalvin Cook posted a career day, taking 22 carries for 181 yards and a touchdown, Zimmer didn’t let him off the hook for fumbling in the first quarter — a play that resulted in a Titans field goal.

Here’s the opening question and his response which set the tone for the rest of his postgame press conference:

Q: I know you don’t believe in moral victories, but do you still see encouraging signs with Justin Jefferson and Dalvin Cook?

Zimmer: I think Justin [Jefferson] played well today. I wish Dalvin [Cook] wouldn’t have fumbled the ball on that one play. I thought we competed today, but we made too many mistakes to win the game.

Zimmer did give rookie Justin Jefferson credit for his seven catches for 175 yards and a touchdown, but it’s clear Zimmer took no moral victories from the game and is focused on turning the team around from its first 0-3 start since 2013.

“[The offense] are all veteran guys, I want them to take charge in those moments — when we have the opportunity to go down and win the football game — and instead, it was chaos,” Zimmer added. We’re going to have to get that squared away.” 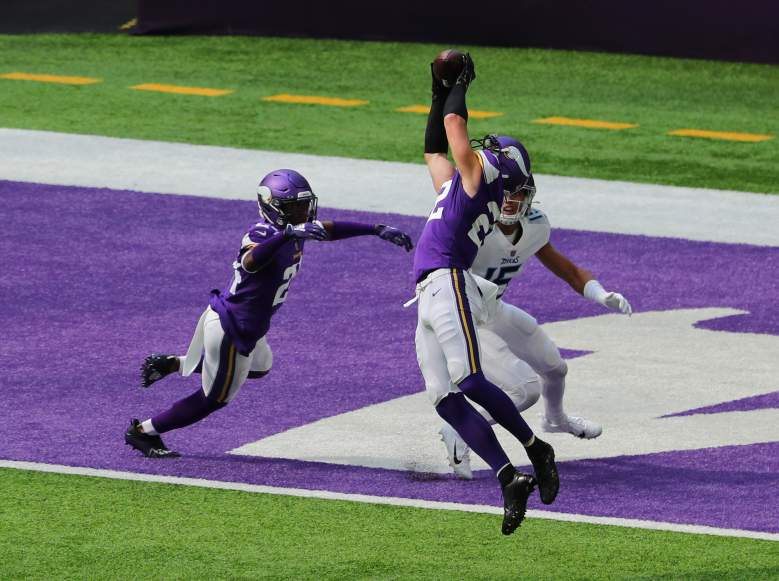 GettyThe Vikings defense forced three turnovers against the Titans, including an end-zone interception by Harrison Smith.

The Vikings defense has been beaten blue with injuries.

Pro Bowl defensive end Danielle Hunter has been on the injured reserve list since the beginning of the season, while Pro Bowl linebacker Anthony Barr joined him on the list with a torn pectoral injury in Week 2 that will force him to miss the remainder of the season. Starting cornerbacks Cameron Dantzler and Mike Hughes were also out with rib and neck injuries, respectively.

The defense gave up 444 yards of total offense — the sixth-most in Mike Zimmer’s career with the Vikings. The second-most offensive yards (522) against Zimmer were given up against the Packers in Week 1.

“I thought there [sic]was times we played really today on defense but with the big plays, you can’t do that, you just can’t do that,” Zimmer lamented a second time for emphasis.

Loading more stories
wpDiscuz
0
0
Would love your thoughts, please comment.x
()
x
| Reply
He was not shy about the Vikings' second-half collapse against on Sunday against the Titans.