Getty Vikings coach Mike Zimmer may have made his decision on the team's new offensive coordinator.

The portrait of the Vikings‘ 2020 season is becoming clear. The team has too many pieces to out-tank the New York Jets, a Dak-less Dallas Cowboys team or any of the other five two-win teams left in the league.

The Vikings touted throughout the first half of the season that their record did not define them with single-point losses to the two top-tier contenders in the Tennessee Titans and the Seattle Seahawks. It’s proven true with back-to-back wins against the Green Bay Packers and Detroit Lions as the team seems to have finally found a winning strategy: Let Dalvin Cook.

It’s only two wins, but they have set the tone for the final seven weeks of the season as the 3-5 Vikings’ opponents winning percentage (.449) stands as the eighth-easiest strength of schedule in the league entering Week 10.

Coach Mike Zimmer’s postgame press conference following the Vikings’ 34-20 win against the Lions on Sunday was telling of how the Vikings will approach the rest of the season.

“Well, when you’re sitting there at 1-5, everything is collapsing. You’re getting ready to jump off the cliff,” Zimmer said as calls for the Vikings to tank seemed to align with the decision to trade Pro Bowl defensive end Yannick Ngakoue during the bye week.

“You beat Green Bay, and then you start to get a little juice. You beat Detroit, and now you start getting a little bit more juice. I think the confidence level helps. I think continuing to play well gives us confidence that we can do these things against good football teams. And Detroit’s a good team, they really are. Maybe they weren’t their best today, but It was a good win.”

The Vikings Will Ride Cook Until the Wheels Falls 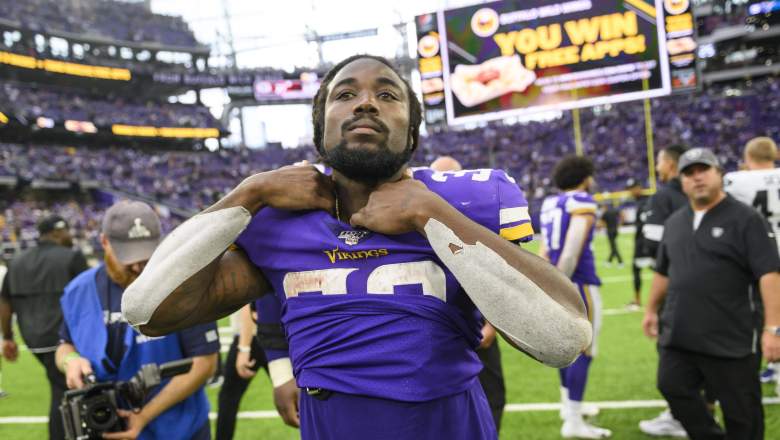 It’s become evident that Cook has become the new emotional leader for the team — not through his words, but his actions.

“When you have a guy like Dalvin in there, all these guys think about, you know, it’s like having a great punt returner. The punt return team is going to go like crazy, and when they’ve got Dalvin down there, they go, ‘Hey, this guy can go the distance at any point if I just do my job,’ ” Zimmer said.

“He’s going to do everything. That’s why he’s a captain. That’s why he comes to work every single day. He’s a terrific leader, he’s energetic, and guys in the locker room really love him.”

NFL ownership approved a seventh playoff spot per conference this past offseason and are considering adding two more teams to the mix given the conditions of the pandemic season.

Teams schedules have already been tinkered with quite a bit and, given the possibility of another outbreak approaching flu season, some teams may not play a full 16-game season by the end of the regular-season schedule.

Rather than invent a Week 18 on the fly, Peter King has speculated that the two additional playoff spots will be announced at some point in the coming weeks.

“They’re going to vote on giving the power to Roger Goodell to essentially allow him to say at some point in the rest of the year ‘we will have eight playoff teams per conference instead of seven, ‘” King told Sky Sports.

“I asked somebody in the league why that was so important. Imagine that the seventh seed in one of the conferences goes 9-6 and their winning percentage at 9-6 having not played one game is better than a team that would be the eighth seed at 9-7, and so the NFL I think just fears making one team miss out on the playoffs because it played its full schedule while another team didn’t.”

If King’s scoop is true, the Vikings playoff hopes will have turned 180 degrees since the bye week. The Chicago Bears are currently eighth in the NFC with a 5-4 record as their primetime matchup on Monday Night Football will be vital for either NFC North team in gaining ground in the playoff chase.

Loading more stories
wpDiscuz
0
0
Would love your thoughts, please comment.x
()
x
| Reply
The Vikings coach spoke on the team's outlook in the final seven weeks of the season.