Richard Sherman tells it how it is.

Sherman said on the Cris Collinsworth Podcast that Jefferson is “playing like a five, six-year vet.”

Sherman: ‘He’s Putting on a Clinic’

Sherman elaborated on just how good Jefferson has been despite having no preseason.

I can’t think of a comparison for him. He’s very unique in his route-running. I think if you put some Marvin Jones, some Allen Robinson in there. At the top of his routes, he’s very veteran. Even in his slants, he’s able to put a little extra wiggle in a short amount of time that you have to run those routes. That’s what’s making it really, really difficult for defenders because he’s a rookie and he’s playing like he’s a five, six-year vet.

And you gotta tip your hat to the kid because he’s not only taking advantage of the opportunity but showing all the people who thought he was just a slot receiver, thought he wasn’t a great route-runner — he’s putting on a clinic, week-in and week-out. So, I wouldn’t be surprised if he had a chance at a Pro Bowl this year, got some All-Pro consideration, just for what he’s done.

He walked into a situation where Stefon Diggs had just been traded and [he had] huge, huge, huge shoes to fill and I think he’s gone out there and they haven’t really missed a beat.

Jefferson is currently the second-highest graded wide receiver by Pro Football Focus, trailing only Green Bay Packers veteran Davante Adams. He is tied with Hall of Famer Randy Moss for the most 100-plus yard receiving games by a Vikings rookie with four on the season.

Jefferson Making a Case for Offensive Rookie of the Year 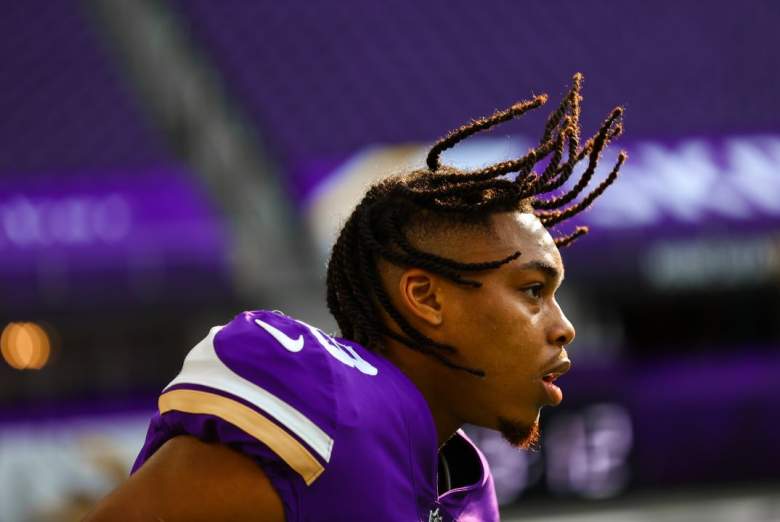 Courtesy of VikingsJustin Jefferson is mounting a case for Offensive Rookie of the Year.

Jefferson could become the Vikings’ fourth non-quarterback to win (Randy Moss, 1998; Adrian Peterson, 2007; Percy Harvin, 2009) to win Offensive Rookie of the Year if he continues on his historic pace.

Jefferson’s 762 receiving yards is the seventh-most in the NFL and leads all rookie wide receivers despite seeing 15 fewer targets than Denver Broncos wide receiver Jerry Jeudy, who has seen the most targets in the rookie class through Week 11.

Kirk Cousins has enjoyed an NFL-best 9.15 yards per attempt this season which has come with the emergence of Jefferson, whose 18.1 yards per catch is tied for fourth among all receivers.

Jefferson leads all receivers (with a minimum of 150 routes run) on most yards per route run with 3.3, outproducing Adams (3.2), Arizona Cardinals star DeAndre Hopkins (2.9) and Atlanta Falcons All-Pro Julio Jones (2.8).

Pinned as a slot receiver who could struggle in the NFL, Jefferson has totaled a league-high 388 receiving yards on vertical routes — over half of his production, per ESPN’s Courtney Cronin.