Courtesy of Vikings Vikings veteran offensive lineman Riley Reiff was cut by the team on Wednesday.

Vikings left tackle Riley Reiff was on the chopping block at the beginning of September. The Vikings needed to sign Yannick Ngakoue and Reiff’s contract was one of the few inflated deals left on the Vikings roster.

Reiff agreed to a new deal that helped the Vikings not only sign Ngakoue but also re-sign Dalvin Cook. A week ago, NBC Sunday Night Football broadcaster Al Michaels described the Vikings‘ 2021 salary cap situation bluntly: “salary cap hell,” with under a $1 million left in the team coffers.

Ngakoue and Anthony Harris will both reach free agency this coming offseason — and with Cousins’ guaranteed contract — the Vikings could come Reiff’s way again in 2021.

Reiff addressed the potential for the Vikings to slash his contract once again.

‘I Take it Hour-by-Hour’

When asked if he allows himself to look beyond the 2020 season given his contract situation and the future of his career on a tightrope.

“I take it hour-by-hour, I love it here” Reiff chuckled. “The Vikings have been great to me, I’m happy to be here.”

Reiff’s contentment was evident after he agreed to a $6 million pay cut — nearly half of his 2020 salary — to remain the team’s starting left tackle and most experienced lineman.

“That’s what happened, and I’m glad to be back here. I’m happy to be here and ready to move forward and keep on playing for the Vikings.”

Through five games this season, Reiff is building a case that his 2021 salary should be shown some mercy. 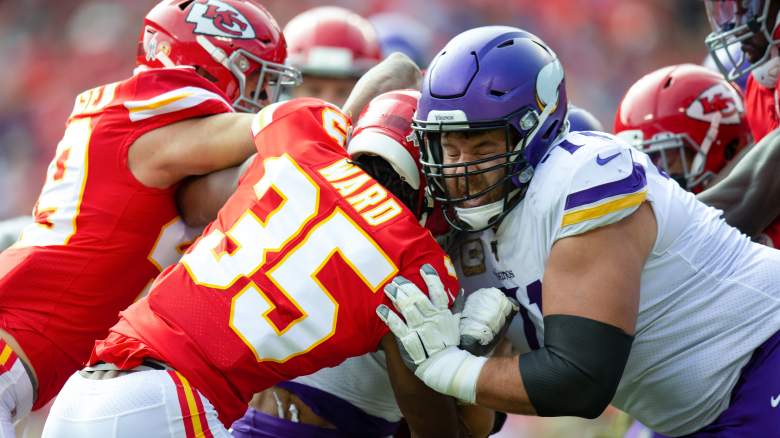 GettyReiff is among the league’s top tackles in both pressures and pass-block efficiency.

Reiff has been a revelation this season after allowing 20 pressures in five games two years ago and two sacks at the five-game benchmark in 2019.

Reiff, in his third season with the Vikings, has allowed the third-fewest pressures and boasts the fourth-best pass-block efficiency grade among offensive tackles, per Pro Football Focus. Allowing zero sacks and not committing a penalty yet this season, Reiff is having a bounceback campaign in his ninth year.

Fans have even begun filling out “apology forms” on Twitter, checking the boxes for what reasons they had not given Reiff a chance and called for his sacrifice on the contract cutting board.

Idek why my dumb ass wanted to cut him so I’m just checking all the boxes and taking the L pic.twitter.com/8yULmQ4dQ4

His performance this season has matched his leadership in the locker room as Reiff has been credited with shifting the culture.

Protecting Kirk Cousins‘ blindside, Reiff has is turning a corner in becoming a veteran anchor to the offensive line that is in the midst of molding its future in 2019 first-rounder Garrett Bradbury and 2018 second-rounder Brian O’Neill.

Both Bradbury and O’Neill were named among the NFL’s most underrated players and have the potential to become stars at their respective positions. Bradbury has ranked in the top 10 starting centers this season while O’Neill has been average while being hampered by sub-par guard play.

The trio could become the foundation for the Vikings who haven’t sent an offensive lineman to the Pro Bowl since Matt Kalil’s rookie year in 2012.

Had Reiff not taken the pay cut at the beginning of the season, there are major questions as to what the Vikings would look like this season. And while a 1-4 record and competing with two undefeated teams isn’t much to write home about, Reiff is making a strong case that is leaving the Vikings second guess what the team may look like without him.

Loading more stories
wpDiscuz
0
0
Would love your thoughts, please comment.x
()
x
| Reply
The ninth-year veteran opened about his outlook with the Vikings after taking a pay cut in the offseason.