Getty The Vikings fast-tracked a young cornerback to the active roster by signing him off the Raiders practice squad.

The Vikings injured reserve list had been racking up players throughout the season, but after the bye week, two contributors are set to return to the active roster.

Starting right guard Pat Elflein and rookie fourth-round linebacker Troy Dye, who was poised to become a top-three option in the Vikings linebacker room before he suffered an ankle injury in Week 2 against the Colts — the same game where Pro Bowl linebacker Anthony Barr went down with a season-ending pectoral injury — returned from the injured reserve list on Monday.

.@elflein65 and @Tdye15dbTroy have been designated for return from IR. pic.twitter.com/qlpxPJHvwK

It’s not clear whether Elflein and Dye will reassume their roles at their respective positions as the Vikings were forced to move on and find replacements.

Elflein was placed on injured reserve after tearing a thumb ligament in practice during Week 3. Dru Samia took Elflein’s place on the offensive line and struggled mightily — becoming the lowest-graded offensive lineman in the league after giving up 14 pressures and three sacks in four games.

Samia was ruled out against the Falcons with a wrist injury that propelled second-round rookie Ezra Cleveland into the starting right guard role. Cleveland pieced together a serviceable performance that was on-par with Samia considering it was his first career start.

With Elflein’s return, the Vikings now have to decide whether to reintroduce Elflein into the starting group or shakeup the group that could see several possible changes.

Left tackle Riley Reiff, who took a pay cut during the offseason, is having a revelatory season. He has allowed the fourth-fewest pressures (4) among left tackles and has yet to allow a sack in six games.

Reiff could be a potential trade candidate as his performance is garnering interest and his 2021 contract could lead the Vikings to cut or asking him to take another pay cut. Cleveland could be in line to start at left tackle if Reiff is traded, while Elflein returns to right guard. 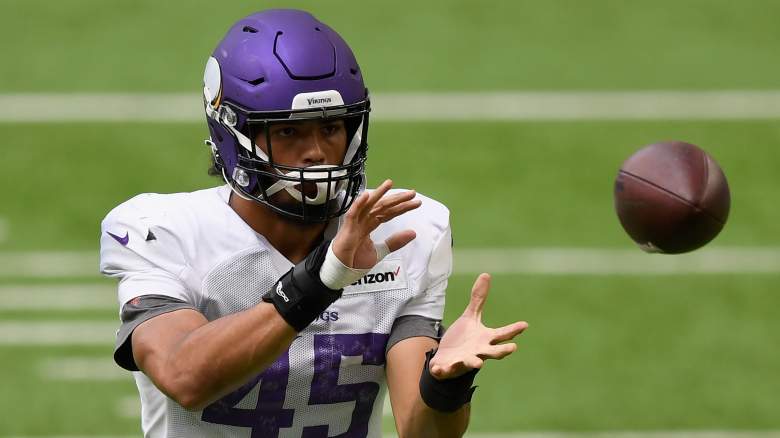 GettyVikings rookie Troy Dye returns to the roster after suffering an ankle injury in Week 2.

The Vikings linebacker group has been bolstered with free-agency adds and practice squad elevations to remedy a bevy of injuries and absences at the position.

It started with starting weakside linebacker and adept run-stuffer Ben Gedeon’s physically-unable-to-perform designation during training camp as the fourth-year veteran suffered two concussions a season ago. Then, special teams and second-year linebacker Cameron Smith underwent heart surgery. The Vikings signed ex-Bengals linebacker Hardy Nickerson and Eden Prairie native Ryan Connelly to add bodies to the depth chart — and this was just the preseason.

When Barr and Dye went down, the Vikings signed former Broncos veteran Todd Davis, who after easing into the Vikings system, saw an uptick in usage, playing 30 snaps against the Falcons.

Dye filled in for Barr during the Colts game over Eric Wilson before going out with an ankle. Wilson has had a nose for making plays this season as the starting outside linebacker job could be his to lose with Dye back in the picture.