No Vikings veteran saw more calls for his mutiny than Xavier Rhodes after his fall from grace in 2019.

Once nicknamed “Rhodes Closed” for locking up some of the league’s best receivers, the former 2013 first-round pick allowed the highest completion percentage of his career last season, leading to his release in March.

He took a $14 million pay cut to join the Colts in the offseason and has already made reasserted himself as a force in the NFL under the pressures of a prove-it year.

After struggling in Week 1 against the Jaguars, Rhodes fittingly came alive against his former team in the Vikings and has since rediscovered his All-Pro form. Rhodes was rated the top cornerback in the league by Pro Football Focus, earning an 89.0 overall grade through the first three weeks.

He received AFC Defensive Player of the Week honors for his Week 3 performance against the Jets. Rhodes picked off Sam Darnold twice and returned one of the interceptions 44 yards for a touchdown.

The Vikings defense is likely missing Rhodes as none of the team’s cornerbacks are rated inside the top 50 by PFF. Cameron Dantzler (who has been out for two weeks) is ranked No. 54, followed by Mike Hughes at No. 70, Jeff Gladney at No. 90 and Holton Hill at No. 99, per Chris Tomasson.

Should the Vikings Have Offered Rhodes to Restructure? 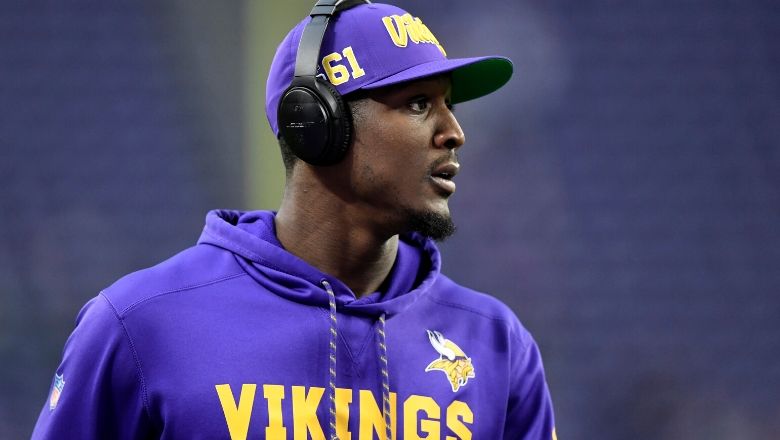 GettyXavier Rhodes’ struggles forced the cap-strapped Vikings to release him in March.

The Viking decided when they signed Kirk Cousins to a contract extension back in March that they’d have to shed some contracts that weren’t serving the franchise anymore. Rhodes was one of the first of several veterans that were cut as cap casualties as his release saved the Vikings $8.1 million in cap space.

Despite being named to the Pro Bowl for the third time in his career in 2019, Rhodes was coming off his worse year in coverage of his career, allowing a 132.7 passer rating when targeted. His release from the team came as a surprise, as Rhodes told the Indianapolis Star that “I didn’t think I would get to this point.”

“If you’re at a team, and you’ve achieved so much at one team, you think it’s going to be forever. It’s a reality check,” Rhodes added.

No play captures his decline in 2019 more than in the NFC Wild Card round against the Saints when undrafted rookie Deonte Harris spun Rhodes around for a season-long 50-yard reception. His longest gain before the playoffs was just 13 yards.

He used to be called #RhodesClosed…. not anymore. Deonte Harris sent Xavier Rhodes out of the picture.

The play splintered the Vikings secondary as Rhodes had a meltdown on the sidelines.

Xavier Rhodes having a meltdown on the sidelines pic.twitter.com/tZRP4x6oii

The play has been branded into the lasting memory of Rhodes’ time in Minnesota after his seven-year career with the team. Rhodes rose to stardom and earned a contract extension that made him the third-highest paid cornerback in the league in 2017. He turned in an All-Pro season that year, posting an NFL-low 39.2 passer rating allowed that earned him the title of best cornerback in the league by NFL.com.

However, the five-year, $70 million contract extension Rhodes signed outlived its welcome as the Vikings found themselves in a financial bind and had to cut ties with seven starters to make room for contract extensions for Cousins and Dalvin Cook.

Rhodes’ willingness to take a $3 million contract this offseason with the Colts begs the question if the Vikings could have kept him by asking the veteran the restructure his contract.

Rhodes put together a clean sheet, not allowing a single completion in coverage in Week 2 against the Vikings.

His lone highlight was a pass breakup against Adam Thielen, in the second quarter while the game was still close. The play was emblematic of the duo’s development into NFL stars as they faced off in a regular-season game against each other after spending seven years on the same team.

“Shoot, I can go back to Day 1 in the Vikings organization at rookie camp [in 2013], going against him every single day,” Thielen said. “Honestly, he’s probably been a big part of who I am today because he’s challenged me, he’s pushed me, he’s made things very difficult on me. That’s what helps you become a better football player when you have a challenge like that, you’re constantly having to perform your best and having to get better, so I give him honestly a lot of credit for helping me become the player I am today.”

Read More
Football, Minnesota Vikings, NFL
The former 2013 first-round draft pick was named AFC Defensive Player of the Week and is the highest-rated cornerback in the league through three weeks.