Bourne was one of rookie quarterback Mac Jones‘ top supporters this season, and now via social media, he’s lending his support to another teammate. Bourne made his desire for free agent right tackle Trent Brown to re-sign with the Patriots this offseason.

Bourne took to Instagram with this message and image for Brown on his story: “U better come back big bro.” 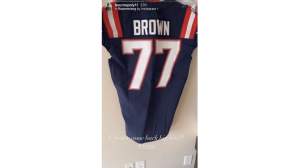 The massive, 6-foot-8 Brown is a fan favorite and an important cog on the right side of the Patriots’ offensive line in 2021. It’s understandable for Bourne and others in Patriots Nation to want him to return.

The Patriots re-acquired Brown from the Las Vegas Raiders this past offseason for a seventh-round pick. The 28-year-old battled injuries and illness in 2020, and he wanted out of Sin City.

New England plugged him into their starting offensive line unit in Week 1, but Brown injured his calf in the season-opening loss to the Miami Dolphins. Brown missed weeks 2-9 before returning to help spearhead the Patriots’ four-game win streak which included blowout wins over the Cleveland Browns, Atlanta Falcons, Tennessee Titans and rough victory over the Buffalo Bills.

That was the best stretch of the season for the Patriots and Brown. Overall, the team went 5-5 in the 10 games he played in–and that includes the playoff loss to the Bills. Brown’s contract is up and he is headed for free agency. It will be interesting to see if Belichick wants to run it back with a bigger guy who has had a series of injuries during his career.

After all, the Patriots were 5-3 without Brown on the field and worst-case scenario, the team could turn to Mike Onwenu to play right tackle in 2022.

Bourne had a surprisingly strong season. He ended the season with career-highs in receptions (55), yards (800), and he tied a high-water mark for a campaign with 5 receiving touchdowns.

Even with his effectiveness, Bourne and the rest of the Patriots’ offense is in need of a speed injection. Just as the Patriots lack burners at cornerback, safety and linebacker, they are also nearly devoid of the speedy sort of wide receiver who becomes a major concern after the catch.

Nelson Agholor was supposed to supply the team a deadly downfield weapon. Unfortunately, Agholor didn’t make the impression the team nor the fanbase had hoped to see. After signing a two-year, $22 million contract in the offseason, Agholor could only manage 37 receptions, 473 yards and 3 touchdowns.

All of those totals are among the worst of Agholor’s career. The Patriots might be tempted to break away from Agholor next season. In either case, Bourne’s overall effectiveness could be augmented by the addition of a speed merchant to open things up in the intermediate ranges.

Loading more stories
wpDiscuz
0
0
Would love your thoughts, please comment.x
()
x
| Reply
New England Patriots WR Kendrick Bourne loves his team and wants one of his teammates to come back in 2022.