The New England Patriots could arguably stand to add a veteran linebacker to their mix to increase the depth at the position. They have already brought Jamie Collins back for what feels like the 10th time.

According to the Patriots’ edge rusher supreme Matthew Judon another legendary New England linebacker, might be coming back out of retirement. Dont’a Hightower has been keeping tabs on the Patriots this season, posting his former teammates’ highlights on social media.

After Judon and Josh Uche exploded for three sacks apiece as a part of the Patriots’ nine total sacks of Indianapolis Colts quarterback Sam Ehlinger, Hightower posted a highlight of the Man with the Red Sleeves.

Judon saw the tribute and posted this on his own Instagram, saying Hightower was coming back because he misses the game. 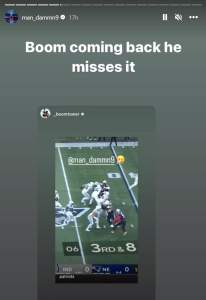 The 32-year-old Hightower hasn’t played at all this season, and he’s a free agent. He helped the Patriots win three Super Bowls and made two Pro Bowls during his career. He sat out the 2020 season as one of the Patriots’ eight opt-out players due to concerns about COVID-19.

In 2021, Hightower appeared to have lost a step. Although, he was asked to be ROLB primarily rather than middle linebacker, where he’d made the Pro Bowl in 2019.

If Judon is correct about Hightower, and there is interest in a comeback, it seems he might only be there to give the team a bit of a veteran push heading toward the postseason.

Hightower’s decreased foot speed and rust should probably give Patriots fans some pause before they get too nostalgic and start to imagine prime Boomtower adding another capable player in the middle of the defense.

Sunday was a big fantasy day for players. No one had quite as good of a day as the Cincinnati Bengals’ Joe Mixon. The running back found the end zone a whopping five times against the Carolina Panthers in the Bengals’ 42-21 win.

Mixon ran for 153 yards with four rushing scores, and he caught four passes for 58 yards and another TD. His fantasy total of 55.1 was just short of the all-time record set by former Kansas City Chiefs running back Jamaal Charles, who had 59.5.

Throwback to the time Jamaal Charles went OFF for 59.5 points – the most EVER in a game by an RB 🔥

Mixon and the Bengals are on the road against the Pittsburgh Steelers in Week 10, and they have a hard act to follow behind the offensive explosion against Carolina.

Around the NFL: Sean Payton Makes it Clear He Wants to Coach Again

The Colts fired their head coach Frank Reich and shockingly hired former player Jeff Saturday who has no NFL coaching experience, on an interim basis.

Former New Orleans Saints coach Sean Payton is one of the hottest names to surface whenever a team has a head-coaching vacancy. This prompted The Athletic’s Jeff Howe to talk to Payton about leaving his current job as an analyst.

According to this tweet from The Athletic, Payton expects to return to coaching at some point, but he’s waiting for the right situation.

He loves his current media gig, but he is under no illusions about his eventual future, he tells @jeffphowe.

“I do think at some point I’ll coach again."

But when he does, it will be on his terms.https://t.co/6XCRCGnBQF pic.twitter.com/iwyugHry1I

That right spot might not be with the Colts, but it will be interesting to see where Payton lands.