Welcome to Heavy In The Trenches, a weekly Wednesday column by Heavy NFL insider Matt Lombardo, bringing you insight on the latest storylines and rumblings around the league. You can follow Matt on Twitter @MattLombardoNFL.

This season has been a New York football renaissance.

After seven weeks, the New York Giants are somehow legitimate factors in the NFC East race, riding the high of a four-game winning streak as the New York Jets trail the Buffalo Bills by just half a game, at 5-2, in the AFC East.

This is the strongest start to a Giants season since 2008. Meanwhile, even a significant injury hasn’t derailed the Jets from pushing chips into the middle of the table to maximize their chances of making a postseason run in quarterback Zach Wilson’s second season in the loaded AFC that includes Super Bowl contenders such as the Bills, Kansas City Chiefs, Cincinnati Bengals and Baltimore Ravens, to name a few.

But, are the Giants and Jets for real? Can their rosters be buttressed by marquee additions at the deadline to better their postseason aspirations?

“Honestly, I look at both New York teams the same way,” former Philadelphia Eagles team president and Cleveland Browns CEO Joe Banner said, during an October 25 appearance on Heavy Sports’ The Matt Lombardo Show. “They’re on the right track. They appear to have the right leadership in place, but they’re not ready to be there yet.”

Head coach Brian Daboll has the Giants all-in on the aggressively competitive culture he is aiming to instill, in large part because New York has stacked close wins and five fourth-quarter comebacks. By playing attacking, swarming defense, and building a scheme that maximizes quarterback Daniel Jones’ strengths in the play-action game, rolling out, and utilizing Saquon Barkley as a battering ram in the 4th quarter as defenses tire, Daboll and the Giants are finding real success despite a roster with real holes.

Wide receiver Kenny Golladay has been a nonfactor for the Giants, Kadarius Toney has been battling nagging injuries, Sterling Shepard was lost for the season, and the offensive line has been in a continuous state of flux. Yet, somehow, even with Richie James leading the team in receiving, the Giants’ lone blemish is a 7-point loss to the Dallas Cowboys.

Meanwhile, Robert Saleh has seen similar buy-in from his team, as the Jets boast a top-10 defense, has seen rookie Ahmad “Sauce” Gardner emerge as a difference-maker in the secondary, nose tackle Quinnen Williams is in the midst of his strongest season, and young playmakers on offense are suddenly forging an identity.

So, what are the Giants’ and Jets’ ceilings? Will roster limitations eventually catch up with these Big Apple upstarts?

“I still think they’re gonna end up with seasons they can feel really good about as works in progress,” Banner predicted. “They feel can really good about it. Their fans can be hopeful, but I don’t think we’re going to see them continue at the pace they are, at least that’s my view. I think that the progress they’ve made in both instances is compelling.”

When the Jets lost rookie running back Breece Hall, who was on the verge of running off with the NFL Offensive Rookie of The Year award, with a torn ACL suffered Sunday in Denver after rushing for 463 yards and 4 touchdowns, Douglas didn’t sit on his hands. The Jets barely waited 24 hours after Hall’s heartbreaking knee injury to trade a conditional sixth-round pick to the Jaguars for James Robinson.

Robinson was supplanted by Travis Etienne for the Jaguars’ lead back, but is still averaging 4.2 yards per carry, and is two years removed from rushing for 1,040 yards in just 14 games. Douglas was dealt a difficult hand, and pushed his chips into the table anyway, in all likelihood to set his young nucleus up to play meaningful football down the stretch.

“I don’t have any problem with what the Jets did,” Banner told Heavy. “They gave up a fairly low pick. You know, the team is working really hard, the coaching steps do a good job. You want to reward them. You don’t want to send the message you’re kind of throwing in the towel.

“Now, if they made another move in which they gave up some high picks, I would think that’s premature for a season like this. I still think probably [a good season] is the best that they can hope for. But to take a relatively low pick and acquire something that I think can help you on the field and send the message to the organization and the players who are working so hard that you believe in them, I think there’s real value in that.

The Jets are in. Douglas might not be all-in, but the message sent to the players and the rest of the organization was clear; be it 4th down or on the trade market, this is a franchise built on aggressiveness.

“Joe Douglas has done a heck of a job,” a current NFL general manager told Heavy. “He really needs to be in the Executive of The Year conversation.”

But, what about general manager Joe Schoen and the Giants?

How will the Jets’ MetLife Stadium neighbors navigate the trade deadline, especially with a roster with so many holes, and a quarterback in Daniel Jones that the organization has no long-term loyalty to and has already declined his fifth-year option, but that is watching success begets more success?

“I think it’s this is an example of how important coaching is in football as we’ve ever seen,” Banner explained of the Giants. “You can kind of combine that with how we view the Saints, where the difference between Sean Payton being there and not, it’s just such a massive difference. And for people that doubt it, it’s just a huge impact that coaching has in the NFL.”

Only four teams have more cap space in 2023 than the Giants’ $53.7 million, and the Jets still have plenty of flexibility with $7.7 million to spend. The Jets are seemingly closer to a complete roster than the Giants, but both Douglas and Schoen have a real opportunity in front of them this offseason to build on this success.

Combined, the Giants and Jets are 11-3 after seven weeks, very much in the postseason conversation and are finding success this season via a brand of aggressive football that embodies their head coaches. Both also feature smart general managers approaching this 2022 trade deadline with a clear-eyed view of what each team is and what the future could be.

That is a potent combination when it comes to culture building, foundation laying and roster construction.

“I think seeing both teams behaving the way they are right now should provide people in New York who have been miserable for a very long time some legitimate hope,” Banner said. “Especially going forward.” 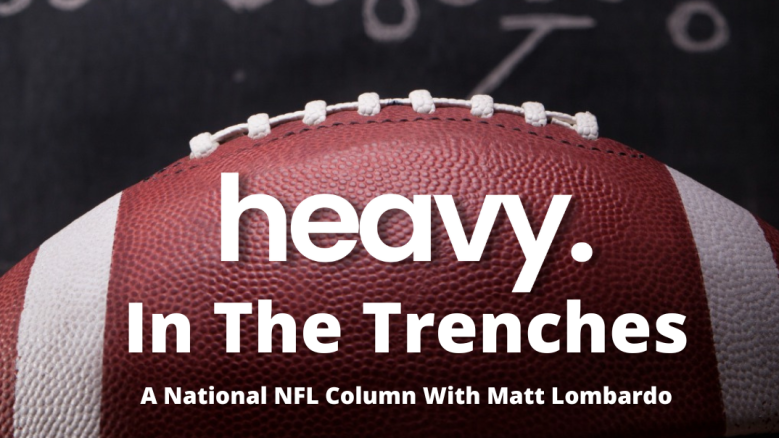 “Oh s***, they get another great player.” – Rams head coach Sean McVay on the 49ers’ trade for RB Christian McCaffrey

McVay and the Los Angeles Rams will get an up-close look at McCaffrey in Week 8 inside SoFi Stadium, after San Francisco 49ers general manager John Lynch pulled off the most significant addition of the trade deadline, so far.

McCaffrey is the kind of back who is tailor-made for head coach Kyle Shanahan’s offense, in large part because of his versatility as a pass-catcher out of the backfield, his ability to line up in the slot, and the fact that he’s averaged 4.6 yards per carry throughout his career, just as he is this season.

“Christian McCaffrey gives them a three-down back in their zone run scheme,” an NFC personnel director recently told Heavy. “Plus a back that can catch the ball out of the backfield.”

More than just a three-down back, McCaffrey is able to lighten the load in the ground game previously shouldered by wide receiver Deebo Samuel in Shanahan’s scheme. McCaffrey also creates even more optionality to dictate to opposing defenses when he and Samuel are on the field at the same time.

Just three full days after being acquired in the blockbuster deal with the Carolina Panthers, McCaffrey flashed in his 49ers debut. The former No. 8 overall NFL draft pick rushed for 38 yards on 8 carries and caught 2 passes for 24 yards, in limited snaps during a 44-23 drubbing by the Chiefs.

Imagine what McCaffrey, a Stanford grad, is capable of after a full week of digesting the playbook and practicing in his new scheme with his new teammates.

The Rams enter Sunday’s pivotal NFC West Week 8 clash allowing 104.2 rushing yards per game.  Staring across the sidelines at McCaffrey, now the 49ers’ workhorse, it feels like Los Angeles’ defense is about to face its most daunting test to date.

There’s something magical happening in Philadelphia.

The Philadelphia Phillies unleashed absolute bedlam inside Citizens Bank Park in Game 5 of the NLCS, when Bryce Harper sent a two-run home run into a raucous crowd leading his team into the Fall Classic for the first time in 13 years.

But, it’s another star on Broad Street who has emerged as his team’s missing piece, turned the fortunes of the franchise around, and grabbed the headlines this fall.

Quarterback Jalen Hurts has led the way to the Philadelphia Eagles emerging as the last of the NFL’s unbeaten. More impressively, Hurts is shining amid the pressure of what was supposed to be a “prove it” season for the three-year veteran.

In his second go-round as the starter in Nick Sirianni’s offense, Hurts has exceeded any reasonable expectations.

As Heavy previously reported, the Eagles would prefer to sign him to a long-term contract extension as soon as he is eligible before next season begins.

But, what might that commitment — expected to be significant — actually look like? Heavy spoke to multiple agents, executives and salary cap analysts to understand a sense of Hurts’ market value and what the Eagles may wind up paying their star quarterback.

“Starting quarterbacks in this league today need to make at least $30 million annually,” an NFL agent told Heavy. “Do I think he’s elite? Probably not, but he’s elite in that system. It wouldn’t shock me at all if he winds up as a top-10 highest-paid quarterback in the league, and he’s for sure in the MVP race.”

Hurts has had an elite first six weeks of the 2022 campaign, passing for 1,514 yards with 6 touchdowns to 2 interceptions, while rushing for 293 yards and 6 touchdowns and picking his spots as a more effective runner.

“I think he’s playing at a top-5 quarterback level,” an agent who has negotiated some of the top quarterback contracts in the sport told Heavy. “If he keeps playing like this, he’ll command $45 million plus. Per season.”

Eagles general manager Howie Roseman has done a masterful job of building a roster capable of pushing for a Super Bowl this season. But, not only that, Roseman has built in the kind of financial optionality to continue building around Hurts to prop Philadelphia’s championship window open for years to come, even after absorbing a significant financial commitment to Hurts.

Philadelphia is currently slated to have $11.3 million in cap space in 2023, according to Spotrac, $29.1 million in 2024, and $139.9 million in 205, the kind of financial flexibility and cap space build to absorb a franchise quarterback contract with room to spare. Plus, the Eagles have two first-round picks to leverage to either move up to grab an elite prospect in the 2023 NFL draft or add two blue-chip players to Hurts’ supporting cast.

On a roster with no glaring needs.

The Phillies have a real chance of bringing home the city’s first championship since the Eagles’ 2017 Super Bowl win. But, Roseman, Hurts and the Eagles may have a wide-open window to add to their trophy case.