The New York Knicks are struggling a bit after getting off to a hot start, and they currently find themselves on the outside looking in on the playoff race in the stacked Eastern Conference.

A lot of the struggles have come from the fact that last year’s All-Star selection Julius Randle isn’t really playing up the levels he has shown in the previous season. He’s definitely the engine that makes the team go, and with the loss of Derrick Rose for about another month, he’s going to need to step up.

Randle has drawn a lot of criticism from both the media and fans this season, and a lot of is warranted, but the Knicks big man isn’t letting it get to him. 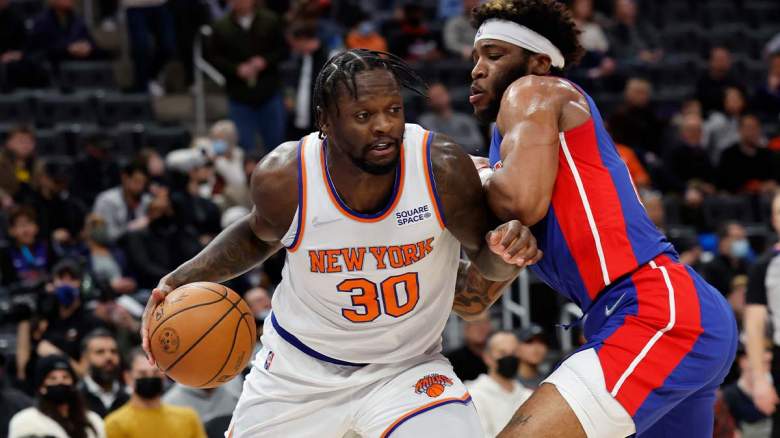 GettyJulius Randle going for a basket against the Pistons.

Speaking to reporters, Randle put it very bluntly by saying he’s not letting any of that outside noise bother him.

Last season Randle was playing for a new contract with the Knicks, and he proved he deserved one. After averaging 24.1 points per game, 10.2 rebounds and six assists through 71 games, Randle found himself on the All-NBA team and a first-time All-Star.

In the offseason, the Knicks rewarded him with a new deal, and his numbers have since come down across the board. Through 36 games this season, he’s averaging 19.6 points per game, 10.1 rebounds and 4.9 assists. These are still good numbers, but it also comes on 42.3 percent shooting from the floor as well as 32.7 percent from beyond the arc, a massive decrease from his 41.1 percent shooting from three last year.

Tom Thibodeau Has His Back

Tom Thibodeau reflects on the Knicks' struggles in the absence of Julius Randle:

"It's like the backup quarterback, everyone thinks the backup should start until he has to start" pic.twitter.com/4uqlJxw298

For what it’s worth, the Knicks coach has his star player’s back. Just days ago, Thibodeau responded to the growing trend that Obi Toppin should be getting more minutes with the team, and possibly even starting.

“The thing is, it’s the day and age of social media, and that’s what social media is,” Thibodeau said to reporters. “You try not to pay attention to it, because it’s really meaningless, whether it’s praise or criticism. It doesn’t really matter. Really, what matters is what we think. And so, we know how important it is. But it’s like the backup quarterback. Everyone thinks the backup should start until he has to start.”

Given his stature, it’d be hard to imagine a scenario where Randle would ever come off the bench. The Knicks don’t exactly have a high-powered offense, so they need him to provide if the team has any hope of being successful.

Thursday night will be a rematch from the season opener where the Knicks came away victorious in overtime, but the Celtics are also looking to answer questions from their doubters, so it should be a good one.

READ NEXT: Knicks Fans Can Breathe a Sigh of Relief for Injured Guard