Getty Julius Randle dribbles the ball up the court.

The New York Knicks are struggling after a hot start to the season, and they now find themselves on the verge of dropping to .500 depending on how their next game goes.

After an encouraging opening night game against the Boston Celtics where the team looked like it was firing on all cylinders, the starting lineup has proven to be disastrous game in and game out.

In a growing trend, the starters struggle to stay in the game, but the bench comes in and the team roars back to life. So far, head coach Tom Thibodeau has been a bit stubborn with his lineup, something he has acknowledged might have to change it soon.

After dropping another game to the Orlando Magic, star forward Julius Randle got candid and told reporters that it’s been rough this season.

How would Julius Randle assess his play this season?

"It hasn't been great… I think it's been exactly how the season has went. There's been good days and there's been not great days" pic.twitter.com/rcqkzWo8ua

After a game where Randle shot the ball 11 times, with 10 of them being three pointers, it should come as no surprise that the Knicks dropped the game.

When asked about how the team’s been playing this season, he gave an honest answer.

“It hasn’t been great,” he began. “A lot of this stuff is rhythm, trying to find each other up. I think it’s been exactly how the season has went. There’s been good days and there’s been not great days. That’s pretty much who we are right now. We’re not a consistent team, a consistent basketball team yet, but we’ll get there.”

It’s tough to pinpoint exactly what the issue is, but it is clear the starting lineup isn’t performing the way the team expected it to. Kemba Walker is averaging just 12 points per game, something that hasn’t happened since his rookie year.

His time in Boston was defined by injuries, so this might be the new normal for him. Strangely enough, fellow new signing Evan Fournier is averaging the same number of points as Walker, and he’s having the worst shooting start of his whole career.

These new signings haven’t quite panned out the way the Knicks would have wanted them to, but there’s still time to turn it around.

Are The Knicks in Trouble? 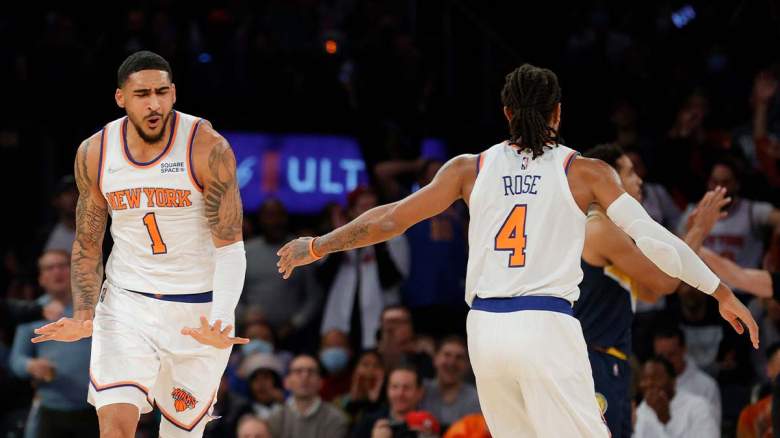 Remember, the Knicks still have a winning record this season, but only just barely. If the starters continue to play the way they are playing, then things aren’t looking good for the future.

Randle says that the team will get back on the right track, and they’ve shown they can hang with anybody in the NBA when everyone is healthy and playing to their potential.

A bigger problem this season for the Knicks has been injuries. Both Nerlens Noel and Mitchell Robinson have been unable to stay healthy, and that does not bode well for a team that’s looking to return to the playoffs for a second season in a row. Taj Gibson has been thrust into a more prominent role, and while he’s been solid, there’s no way that was the plan coming into the season.

With their next game being against the Houston Rockets, look for the Knicks to right the ship then.