The results of the yearly NBA general manager are in and the New York Knicks were snubbed in a big way depending on who you ask.

This survey showed the Knicks dropping out of their top-4 spot in the East that they secured last season, and surprisingly, the GM survey didn’t even have them in the top seven teams.

While many would agree that the Knicks did overshoot their expectations last season, the team has made significant upgrades this offseason, so a steep drop like that likely isn’t expected to happen. The Eastern Conference is very deep now and with teams like the Milwaukee Bucks, Brooklyn Nets, Boston Celtics and Miami Heat all jockeying for the top spot, it’s hard to put the Knicks over any of them.

As is the case with every NBA season, dark horse teams do come out of nowhere, and we’re also coming off a season where the Bucks and Phoenix Suns played each other in the NBA Finals.

New Knicks point guard Kemba Walker was asked what he thinks about the survey, and he didn’t hold back.

Kemba Walker on the Knicks not being top-7 in the GM survey: "I could care less. It’s like that every year. Teams come out of nowhere all the time. Most of these GMs never played basketball. Let’s be real. Who cares what they think? I could care less. We believe in ourselves."

According to The Athletic’s Fred Katz, Walker doesn’t put a ton of stock into what the GM’s think about the Knicks’ chances this season.

“I could care less,” Walker said. “It’s like that every year. Teams come out of nowhere all the time. Most of these GMs never played basketball. Let’s be real. Who cares what they think? I could care less. We believe in ourselves.”

To be fair, the Knicks were one of those teams that “came out of nowhere” last season to claim home court advantage in the first round of the NBA playoffs.

With the improvements made in the offseason, there’s a chance that the team could perform well again, but it does mean that a lot of dominoes will have to fall their way. The expectation is that the Knicks will return to the playoffs for the second year in a row, but it’s hard to predict the seed they’ll get. 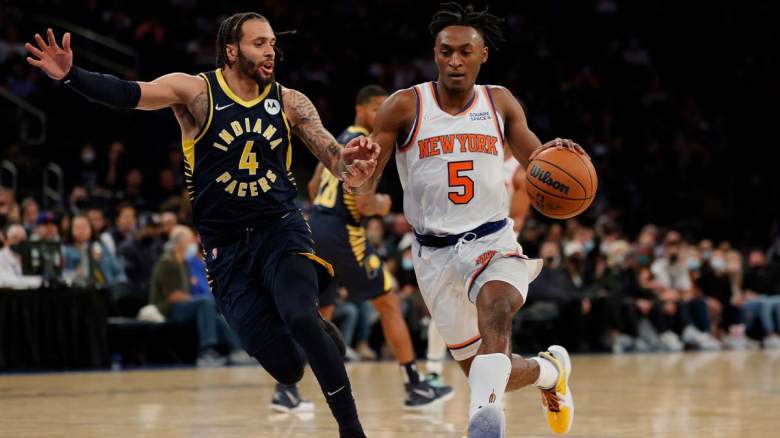 On paper, the Knicks do look like they can compete with anybody, provided their key pieces are able to stay healthy.

There are big question marks around names like Walker and Mitchell Robinson. In the case of Robinson, he might not even be ready for the start of the season, and Walker is coming off an injury-riddled season where he didn’t even play on the second night of back-to-backs.

If health isn’t an issue, it’s still hard to put the Knicks above the likes of the Bucks or Nets, but an argument can be made that puts them on a similar level of teams like the Hawks or 76ers, especially if they don’t head into the season with Ben Simmons.

The Knicks have a lot of weapons going into the season, and their bench is looking more solid than it has in several years now. Like Walker said, the team believes in itself and that type of mindset can take a team quite a long way.