The New York Knicks are trimming down their roster ahead of the start of a new season, and this means that a newly signed guard was released, but this was an expected move.

With the Knicks having such a deep bench going into the season, every spot matters and the team is doing their best to get everything rounded out in the coming days.

Former Seton Hall star Myles Powell signed with the team on Tuesday, but he was never expected to lock down a roster spot. Instead, the signing was made with the expectation that he’d report to the Westchester Knicks, the team’s G-League affiliate.

This doesn’t mean Powell has no hope of ever making an NBA roster, but it does mean that he won’t be spending a lot of, or any, time with the Knicks this season.

Knicks had signed Powell to an exhibit 10 contract, which means the purpose was as a way to get him a guaranteed $50K (the most they can guarantee with that kind of deal), then get him onto their G League affiliate. The quick release after he signed yesterday is not a surprise. https://t.co/vl2INV1aGq

According to The Athletic’s Fred Katz, the Knicks had signed Powell to an exhibit 10 contract, which would guarantee the former college star $50,000 and get him on the G-League roster.

Powell is no stranger to Westchester as he signed with them back in January and through 13 games with the Knicks’ G-League affiliate, he averaged 17.8 points per game, while also shooting a very impressive 44.6 percent from behind the long line.

Since then, he’s been bouncing around between Westchester and New York, but he’s never been able to lock down a spot on the NBA roster. At 24-years-old, the door isn’t shut entirely, and it’s clear that the combo guard does have talent, but that’s not enough to get him into the NBA.

Despite being a consensus first-team All-American and the Jerry West Award winner at Seton Hall, Powell went undrafted in 2020. The Knicks still took a flyer on him, and there’s no reason not to with a character that prestigious in college, but it wasn’t good enough for him to break into the league.

Through his four years at Seton Hall, Powell averaged 17.5 points per game.

How Are the Knicks Looking? 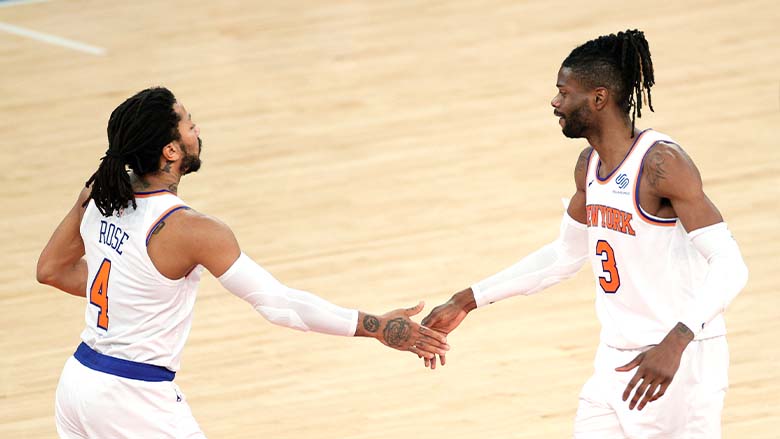 As the team continues to trim its roster down, the rotations are looking clearer than ever. The Knicks boast a deep team with the likes of Obi Toppin, Derrick Rose, Immanuel Quickley and Alec Burks all coming off the bench. In different circumstances, each one of those players could potentially be starters.

Even rookies like Jericho Sims and Quentin Grimes have impressed in what little we’ve seen of them.

On the Knicks, these players make up the bench that Tom Thibodeau is so fond of. Despite this, the Knicks are projected as a fringe playoff team, so they will be looking to prove all of the doubters wrong for two straight seasons.

This team is much improved from the previous season, but the Eastern Conference is also better across the board than it has been in past years.

The Knicks certainly have their work cut out for them if they want to make a playoff run, but they definitely have enough talent to at least make it there for a second season in a row.