The New York Knicks currently find themselves sitting at a game under .500 on around the quarter mark of the season, so while there’s still time to get things turned around, the clock is ticking.

At the beginning of the season, things looked promising thanks to the signings of Kemba Walker and Evan Fournier, but Walker struggled so much in the starting point guard role that he was removed from the lineup completely.

Since that point, coach Tom Thibodeau has been experimenting with different lineups whether it’s Mitchell Robinson coming off the bench or Alec Burks starting.

ESPN’s NBA analyst Stephen A. Smith, an outspoken Knicks fan himself, is not happy at all with how the Knicks have played this season, and he let everyone know on his show First Take.

After dropping below .500, the Knicks find themselves in a tough spot as they have to both figure out what works and now they have to find out how to climb back into the Eastern Conference playoff race.

On top of all that, the national media is blasting the team, starting with Smith.

“You damn Knicks,” he began. “Y’all are getting on my damn nerves. Obi Toppin goes into the open court, does a between-the-legs dunk, the New York Knicks were down seven at the time, that pulled it to within five. But you ended up down by damn near 30. You’re a game under .500. Wake the hell up! You’re a below-average team, dammit. I am setting here making bets about the New York Knicks, we’re here, we’re here, New York stand up. You’re sitting the hell down.”

OBI TOPPIN DID THAT 🤩 pic.twitter.com/BL8FPc1VmL

As it turns out, Toppin had one of the only highlights in the loss to the Pacers, but it did come in the second quarter in a game that the team was trailing.

Smith then set his sights on the rest of the team, including coach Thibodeau.

“Get your damn act together. Julius Randle, play some team basketball. Tom Thibodeau stop giving him the ball 19, 20 feet from the basket so we can see his ballhandling skills, only to watch him use his left hand because we know he and R.J. Barrett are allergic to using their right hand,” Smith continued. “What the hell is going on, New York Knicks? I’m pissed off. Get it together. Y’all look like trash. 12-13 on the season, after the year you had last year? What the hell is wrong with y’all? You ain’t that damn good, stop acting like it. Play together. Play team ball. Figure it out.” 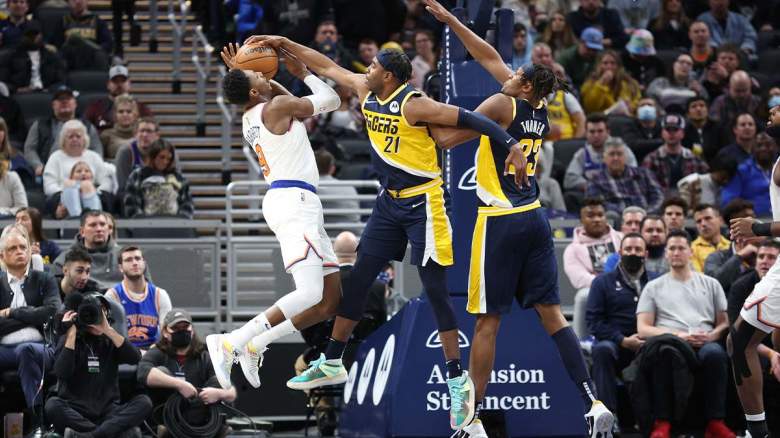 The Knicks have a roster that seems like it could compete in the east, but that hasn’t exactly panned out for them.

Recently, they’ve been linked to Indiana Pacers big man Myles Turner and getting him could provide a massive boost to the team. Only time will tell if that’s the case.

Without Walker, the Knicks might need to find themselves another point, and if it’s not going to be Damian Lillard, they might have to set their sights elsewhere.

Loading more stories
wpDiscuz
0
0
Would love your thoughts, please comment.x
()
x
| Reply
The Knicks have been struggling as of late and this analyst has had enough.