With the NBA Draft coming up on July 29, teams are trying to work some last minute magic with others across the league in an effort to move up to grab better players or move down in attempt to gain more picks, and the New York Knicks are included in all of that.

When it comes to first round picks, the Knicks hold both No. 19 and No. 21, and with the draft being viewed as deep, there is definitely some value to be gained there. The team has looked Oregon sharpshoot Chris Duarte as an option, among several other players.

The Knicks are in sort of “win now” mindset after securing home court advantage in the first round of the most recent NBA playoffs. In an effort to capitalize on the talent they have now, the team has tried to move up in the NBA Draft lottery to try and get some better talent.

As it turns out, the team might’ve already tried to do that in a trade with the Golden State Warriors, but they were denied. 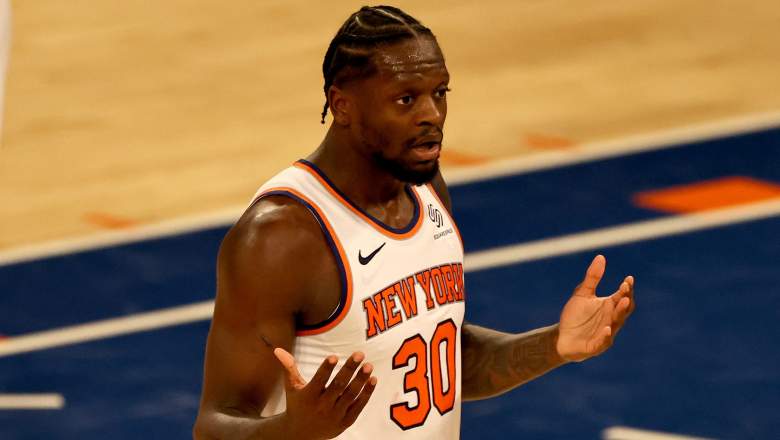 GettyJulius Randle reacts to receiving a foul during a February 27 game against the Indiana Pacers.

According to Bleacher Report’s Jonathan Wasserman, the Knicks offered the Warriors both of their first round picks in exchange for the No. 14 pick in the draft, but they were turned down.

On the surface, that may not look like the team is moving up that much, but it would’ve been enough to get them into the tail end of the lottery.

Even though it’d just be five picks earlier, it’d open a lot more doors for the Knicks to get a player they might be targeting. For example, the Warriors are also reported to be looking at Duarte, and they would have the first crack at him before the Knicks could even get to him.

There are more examples than that, but it just goes to show what a different a few spots could make. On the other hand, the Warriors will have Klay Thompson returning to a team that missed out on the playoffs by losing in the Play-In Tournament, so the Warriors are going to try and get the best talent available in an effort to make another deep playoff run.

What Can the Knicks Do?

There was a growing belief that the Knicks would get into the lottery or package the picks in a trade for a big name player like Damian Lillard.

With the draft fast approaching, the options are growing more and more limited. If the Knicks want to get into lottery, they’ll need to work some magic. At the end of the day, the Knicks do have a good, young core to build around, but if they’re looking to compete for a championship right now, they’ll need to add some more pieces.

At the very least, they should be able to content for another playoff spot with the squad they currently have, but there’s certainly room for growth.

The NBA Draft take place on July 29 and as of right now, the Knicks will have two selections in late first round.

READ NEXT: Knicks Looking to Trade Into the Top-3 of the NBA Draft: Report

Loading more stories
wpDiscuz
0
0
Would love your thoughts, please comment.x
()
x
| Reply
The New York Knicks were denied a chance to get into the NBA Draft lottery according to a report.