World number one Novak Djokovic spoke for the first time since the controversy broke out over his participation in the Australian Open.

In a message posted in the “stories” of his Instagram account on Friday, the player thanked people around the world for the support received while awaiting a decision on his possible deportation from Australia.

“Thank you to people around the world for your continued support. I can feel it and appreciate it tremendously.” 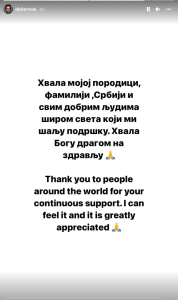 The 34-year-old Djokovic landed this week to play in the Australian Open, having received a controversial exemption from that country’s vaccination rules.
But despite the waiver, Australian Border Force officials denied him entry into Melbourne airport for failing to provide “adequate evidence.”

Djokovic has been at the center of the controversy, not only because he could well be deported in a court decision that will take place next Monday.

Happy New Year! Wishing you all health, love & joy in every moment & may you feel love & respect towards all beings on this wonderful planet.

I’ve spent fantastic quality time with loved ones over break & today I’m heading Down Under with an exemption permission. Let’s go 2022! pic.twitter.com/e688iSO2d4

The Serbian player has been questioned for his critical position towards vaccines. In April 2020, long before covid vaccines were available, Djokovic said he was opposed to vaccination.
He has also said that he keeps an “open mind” but that he wants to have “the option to choose what is best” for his body.

During a Facebook Live, he explained that he would not like “to be forced by someone to get vaccinated” to travel or compete in tournaments.

The waiver was granted by two independent medical panels organized by Tennis Australia, the body that runs the event, and the state of Victoria. The decision angered many Australians, who continue to face heavy restrictions to prevent covid from spreading.

For now, Djokovic is being held in an immigrant hotel in Melbourne that has often been criticized by refugees for its poor conditions. Serbia has demanded that the player be transferred to a better hotel.

Djokovic’s Family Reacts To This Situation

Even his mother Dijana came out to demand a move.  She said that he was being treated “like a prisoner”.

This goes against what Australian Home Affairs Minister Karen Andrews said when she denied in an interview she gave  that Djokovic is being held captive, adding that the tennis star “is free to leave at any time.”

His wife also came out and mentioned that he was being isolated from his family during Serbian Orthodox Christmas.

“It’s Christmas today for us, my wishes are for everyone to be healthy, happy, safe and together with families. We wish we are all together today, but my consolation is that at least we are healthy. And we will grow from this experience,” said Jelena Djokovic on her Instagram account.

“Thank you dear people, all around the world for using your voice to send love to my husband,” she added.

Djokovic Not Given Sympathy From Rafael Nadal

Spanish tennis star Rafael Nadal show little sympathy for the Serbian as he, too, is looking for a historic 21st Grand Slam title.

“I think if he wanted, he would be playing here in Australia without a problem,” Nadal commented on Thursday. “He made his own decisions, and everybody is free to take their own decisions. But then there are some consequences,” said Nadal.

“Of course I don’t like the situation that is happening. In some way I feel sorry for him,” Nadal noted. “But at the same time, he knew the conditions since a lot of months ago, so he makes his own decision.”

What is failed to be mentioned or understood in all of this by Djokovic is that Melbourne is the city with the most time on lockdown in the world with 262 days that ended back in the month of October.  So it is understandable why his entry into the country and the way it was originally granted created such a stir.