You never know what’s going to come out of Antonio Brown‘s mouth. Most times, it’s questionable; other times, what Brown says makes you restore your faith in him, if only just for a moment.

In case you didn’t hear, Steelers quarterback Ben Roethlisberger called it a career on January 27 after 18 Hall of Fame-worthy seasons in Pittsburgh.

Roethlisberger spent half of his career with Antonio Brown on the receiving end of his passes. The two made highlight-reel magic on the football field for nine glorious years. Brown was easily Roethlisberger’s most productive target as they combined for 1,275 yards and 74 touchdowns.

Following Roethlisberger’s announcement, fans and colleagues took to social media to post well-wishes to the legendary quarterback. Brown got in on the congratulatory action with the tweet: “Best tandem in the NFL, Congrats Legend.”

While there was a smattering of wish-you’d-never-left-Pittsburgh comments in response to Brown’s message to Roethlisberger, most roasted the former Steelers receiver calling him a narcissist and a back-stabber.

Signs of a narcissist:
Has to include himself when congratulating someone else. Has put himself in the forefront of the picture essentially hiding the other person. Has make sure his name and number are visible first. Always acknowledges others by saying “we were the best”.

One fan tweeted, “AB you two had something so special. It’s such a shame things went south because that magic couldn’t be replicated. Do you ever stop to think about where things went wrong?”

Another fan wrote that Brown doesn’t get that privilege anymore. “You don’t get to talk about that anymore, you burnt that bridge along time ago. We remember what you said on the way to Oakland.”

“Always stabbing backs, then trying to return to the place that fed you,” one football fan wrote.

Another fan tweeted, “Y’all can hate AB all day but stop acting like he wasn’t great when he wore the black n gold. So many unbelievable plays. The 2010 divisional playoff game, Christmas Day 2016 arm extension play just to name a few.” 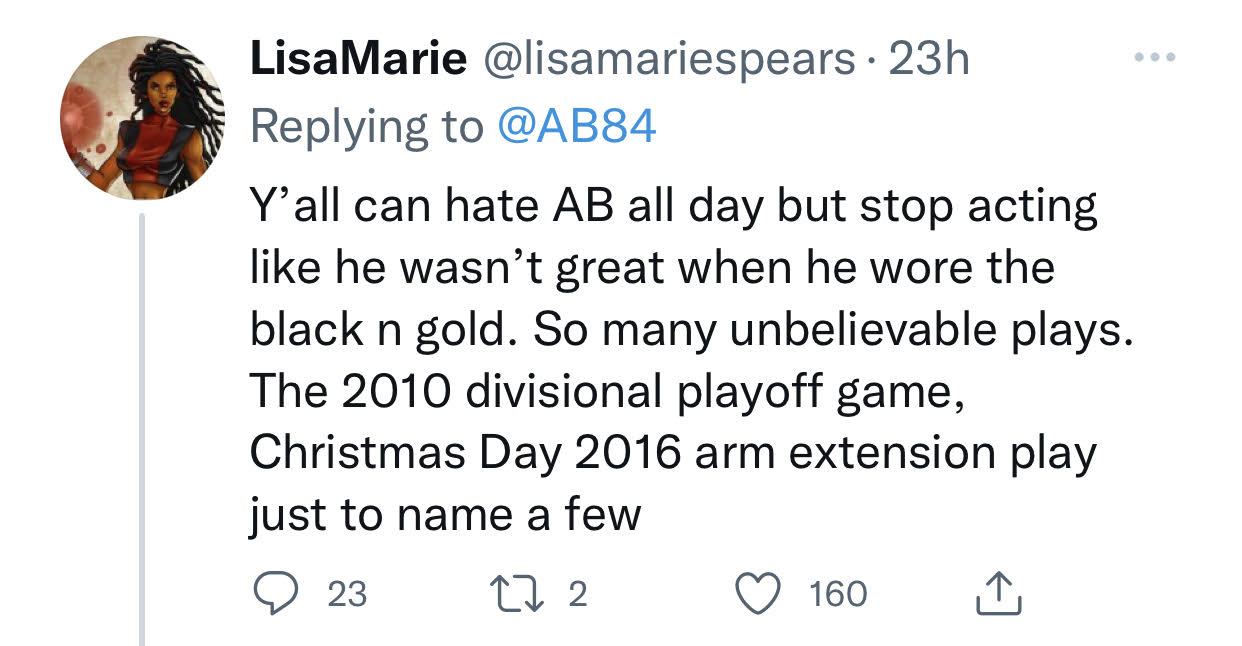 “Really? You bad mouthed him the second you were out the door,” one Steelers fan wrote.

This fan made an astute observation questioning the final hashtag in Brown’s tweet. “Sometimes on a rare occasion, AB posts seem to start out positive with a purpose, then always goes sideways. Exhibit A, #PitnotthePalace?”

Sometimes on the rare occasion , AB posts seem to start out positive with a purpose, then always go sideways. Exhibit A, #PitnotthePalace?

Ah, never a dull day at the office when Antonio Brown is involved.

Antonio Brown is currently a free agent after the fiasco that ended his brief yet Super Bowl-winning career in Tampa. Whether another team will risk signing him to their roster is yet to be seen, but Baltimore Ravens quarterback Lamar Jackson has shown interest.

Imagine if Brown hadn’t gone off the deep end in Pittsburgh how much more spectacular his career would’ve been. In nine seasons, Brown compiled 11,207 yards and 74 scores — not to mention six consecutive Pro Bowl selections (seven total) and a myriad of other incredible honors.

In 2017, the Steelers signed Brown to a four-year, $68 million contract which, at the time, made him the highest-paid receiver in the NFL. That contract tied him to Pittsburgh through 2021. If his antics hadn’t gotten him a premature exit from Pittsburgh, Roethlisberger and Brown could’ve continued their upward trajectory.

Brown has put up Hall of Fame numbers, but there’s no question that his off-the-field antics have cost him his first-ballot nomination. Former Cowboys and Eagles wide receiver Terrell Owens didn’t get his gold jacket until eight years after he left the game, and his behavior is considered mild compared to Brown.

“Owens, who is top 10 all time in receptions (1,078), receiving yards (15,934) and receiving touchdowns (153), was kept out of the Hall of Fame for his first two years of eligibility for reasons that go beyond the football field,” wrote Will Brinson of CBS Sports in 2018. “It was almost explicitly as a result of Owens’s behavior outside the lines. Owens was a notoriously huge pain in the rear as a teammate and for the media to cover.”

While Brown has almost certainly earned himself a coveted spot in the Hall, he’ll have to be patient.

Loading more stories
wpDiscuz
0
0
Would love your thoughts, please comment.x
()
x
| Reply
Big Ben and AB were one of the best tandems in NFL history.