For PSG, it just seems like they cannot have a full squad this season. Injuries have plagued the French side and now they will add another player to the list. After studies were concluded on Brazilian international Neymar’s latest injury will keep him out of action for the next 6-8 weeks.

This was confirmed by the club via a statement made on Monday where they confirmed the severity of the gruesome injury that he suffered in PSG’s 3-1 over St. Etienne over at the Geoffroy. This with their upcoming clash against Nice coming up next round for the Ligue 1 table toppers.

According to the club, Neymar suffered from a Grade II sprain of his left ankle. The team confirmed the severity as they mentioned that there was “ligament damage”.

Neymar is stretchered off in the final minutes against St-Etienne in what appears to be an ankle injury 😞 pic.twitter.com/P8Jq4bxIKM

This occurred in 85th minute of the match when he ended up rolling his ankle after accidentally stepping on a St. Etienne defender’s leg. The winger was then taken off the pitch on a stretcher and shortly thereafter underwent a batter of tests.

What Will Neymar Miss?

Although this happened much sooner than his usual injuries that occur during the season, Neymar is ruled out for PSG’s final Champions League group stage match against Club Brugge.

Looking into the month of January, he will also be out for Brazil’s World Cup qualifying matches against Ecuador and Paraguay. Although in Brazil’s case they do have the luxury of not needing him as they have already assured a spot in the World Cup. Neymar’s absence does offer national team coach Tite, the opportunity of looking at other players and formations as he will take the next year to have every detail covered for when Qatar does roll around this time next year. 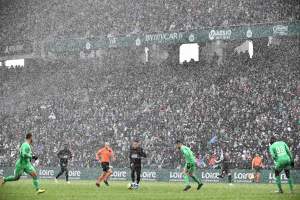 GettyTOPSHOT – Paris Saint-Germain’s Brazilian forward Neymar (C) runs with the ball as snow falls during the French L1 football match between AS Saint-Etienne and Paris Saint Fermain (PSG), at the Geoffroy-Guichard stadium in Saint-Etienne, central France, on November 28, 2021. (Photo by Jeff PACHOUD / AFP) (Photo by JEFF PACHOUD/AFP via Getty Images)

In total, Neymar would be missing around 9-11 matches after all is said and done.

Not All Is Bad News

Despite the bad news coming from Neymar’s injury, there are some things were quite positive for the Parisians this weekend.

Four other players of note either came to practice on Monday or are scheduled to do so in the coming days.

Italian international Marco Verratti returned to practice on Monday, while Mauro Icardi is supposed to be returning on Tuesday, Georginio Wijnaldum on Thursday and Ander Herrera will do so by the end of the week.

The only that is still a couple of weeks away for Mauricio Pochettino is Julian Draxler as he is in the final stages of recovery from a muscle injury he suffered while playing for Germany.

Our 9 nominated in the ceremony tonight! 🏆❤️💙

Sergio Ramos and his unlikely endorsement 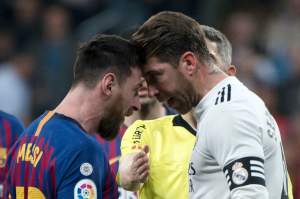 Sergio Ramos made his debut and is slowly.  He also did something that left Real Madrid fans in shock as he supportes his now teammate Leo Messi for the Ballon D’Or that will be given out by France Football.

“Yes, of course [I hope he wins],” said Ramos in an interview that he gave ESPN. “I’m going to defend the guys in my team. I wish him all the luck in the world.”

That, of course must sting some fans of Real Madrid especially after years of seeing both of them battle one another in Spain.