This final stretch of the season have Real Madrid with aspirations of winning two titles, but also on the verge of a complete physical breakdown. Los Merengues find themselves just one point away from the top spot in La Liga as well as a win away from getting to the Champions League final, but their lineup is slowly looking more like a hospital ward than a football team.

This is one of the advantages that Chelsea will be facing in the return league over at Stamford Bridge.

The Real Madrid medical staff made it official on Monday that the 13-time European champs would be without French international Raphael Varane after suffering an abductor muscle injury in the team’s 2-0 victory against Osasuna.

According to Diario Marca, Varane was basically “discarded” after this past weekend, despite him saying that it was not that serious.

There is no timetable on his return and his absence further complicates Zinedine Zidane’s problems in what is another crucial week for his team.

This would leave both Nacho and Eder Militão as the two starting defenders by default against Thomas Tuchel’s side on Wednesday.

With Varane’s absence, Real Madrid have now suffered 58 different injuries so far this season. This is also including players that have missed time due to COVID-19 issues. According to Diario SPORT in Barcelona, this is 17 more injuries that the Catalans have suffered if you use the same criteria.

The only two players that have not suffered injuries this season for the Valdebebas side are Belgian goalkeeper Thibaut Courtois and his backup Andriy Lunin, although the Ukranian did turn up positive for COVID-19.

So far this campaign, Zidane has not had the entire squad at his disposal. 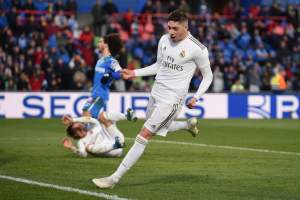 Midfielder Federico Valverde took his PCR test and based on the results, he could join the envoy that is heading to London for their midweek clash. The Uruguayan international was positive for COVID-19 back on April 21 and is still waiting to get the green light to return to action.

Another player that wants to be available is captain Sergio Ramos. The Spanish international has already trained with the team, but not at the same rhythm as the rest. That said, Ramos is anxious to be able to return to action as quickly as possible. The former Sevilla man wants to be available for the Chelsea clash, although all signs point to him being an option off the bench, at best.

A Very Complicated Week In A Heated Race

Not only are Real Madrid facing a difficult situation in Champions League, their league prospects could be defined this week as well.

Los Blancos are heading to Seville this coming weekend to face Sevilla in a match that could set the tone for the final three weeks of the season. This match, which is the co-main event of the weekend’s docket in La Liga alongside Barcelona-Atlético Madrid, could have a new leader.

A Madrid win combined with a Barcelona- Atleti draw or Barcelona win would see the reigning league champs back on top of the table. The latter scenario would have Madrid on top after having won both Clásicos this season.

Sevilla, with a win would also be able to get closer to the top of the table and fight for a league title that they last won back in the 1945-46 season and last ended up in second place in 1956-57.

This is all part of rare scenario in Spanish football where there are four teams actively competing for a league title this late in the season.