The 2019 Macy’s 4th of July Fireworks Spectacular broadcasts live tonight, from 8 – 10 p.m. ET on the NBC network, with an encore presentation of the fireworks airing directly after the show. This year’s annual event moves downtown, launching from the East River, over NYC and, for those who want to watch the display, as well as the big concert event, there are plenty of options. You don’t need to have a TV to watch the show. If you don’t have cable, you can watch a live stream of NBC on your computer, phone, Roku, Fire TV, Apple TV or other streaming device via one of the following cable-free, live-TV streaming subscription services:

NBC (live in most markets) is one of 95-plus live TV channels included in the main FuboTV bundle.

You can start a free 7-day trial of FuboTV right here, and you can then watch a live stream of NBC on your computer via the FuboTV website, or on your phone (Android and iPhone supported), tablet, Roku, Apple TV, Amazon Fire TV, Chromecast or other supported device via the FuboTV app.

In addition to a Netflix-like on-demand streaming library, Hulu also offers a bundle of 60-plus live TV channels, which includes NBC (live in most markets).

You can sign up for “Hulu with Live TV” right here, and you can then watch a live stream of NBC on your computer via the Hulu website, or on your phone (Android and iPhone supported), tablet, Roku, Apple TV, Amazon Fire TV, Chromecast, Xbox One, Nintendo Switch, Echo Show or other streaming device via the Hulu app.

PlayStation Vue–which doesn’t require an actual PlayStation console to sign up or watch–offers four different live-TV channel packages, all of which include NBC (live in most markets).

You can start a free 5-day trial of PS Vue right here, and you can then watch a live stream of NBC on your computer via the PS Vue website, or on your phone (Android and iPhone supported), tablet, Roku, Amazon Fire TV, Apple TV, Chromecast, PlayStation (3 or 4), or other supported device via the PS Vue app.

NBC (live in select markets) is included in the “Sling Blue” channel package.

You can start a free 7-day trial of Sling TV right here, and you can then watch NBC live on your computer via the Sling TV website, or on your phone (Android and iPhone supported), tablet, Roku, Apple TV, Amazon Fire TV, Chromecast, Xbox One or other streaming device via the Sling TV app. 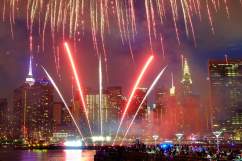 Derek Hough and Ciara are this year’s hosts and, according to Macy’s, the actual fireworks will launch at 9:20 p.m. ET and generally last around 25 minutes. There will be over 100 firing locations, with 70,000 firework shells going off, according to Fox Business. There will also be 1,600-foot waterfall bursts.

Six computers control the fireworks display, which takes 12 days to set up. According to NBC New York, this year’s display took six months to plan and put together. Some of the new effects being incorporated in this year’s show, as reported by Market Watch, are being called the Wolf Whistles, Little Snakes, Hidden Happy Faces, Revolving Dragons and Multicolor Meteor Mines, with 28 colors involved. Susan Tercero, vice president and executive producer of the Macy’s 4th of July Fireworks, talked about what to expect this year and said, “We do like to change our creative every year. It’s nice to change it up. And the way to do that … is to move it a little bit … We have close to five times the amount of pyrotechnic effects that are happening on the bridge this year. We have a lot more show.” The names of the new fireworks describe the shapes and sounds of the pyrotechnics.

In addition to the fireworks, Macy’s will have a theme of classic American Cinema included in the show, with The Wizard of Oz celebrating its 80th anniversary. Because of this, a recording of Jennifer Hudson singing “Somewhere Over the Rainbow” will play during the event.

When it comes to viewers, there is an estimated 1 – 3 million in-person spectators expected and over 10 million people watching the event at home. Tune in to watch the biggest display of fireworks in our nation.

Other televised fireworks events include A Capitol Fourth and Boston Pops Fireworks Spectacular. These, too, are annual events.