Dolly Parton: Here She Comes Again! airs tonight at 10 p.m. EST on ABC. The special brings viewers an intimate look at the life and career of country star Dolly Parton, along with never-before-seen archival interviews and performance footage. It will be hosted by journalist Robin Roberts.

Here She Comes Again! documents Parton’s career from musical upstart to country legend. “It’s just a country Cinderella story, really,” she said during an ABC interview. “I used to wonder what my life might be like when I was older, and when I looked back on my life, what it would be like. It feels good that I have been able to see so many dreams come true.”

“Everything was music to me… if someone was hammering on the other hill at the sawmill, I’d start writing a song with that rhythm,” Parton added. “I still write [songs]. I still have to have my yellow legal pads and my cassette player, and I have to order them off eBay. [I’m] Aunt Dolly, I’m like that mother figure. I’m the one that’s older now to kind of look down on the kids and say, ‘OK, come on, you can do it and you’re doing great. I’m proud of you.’”

Parton also talked about the special, and how she has no plans of slowing down her career. “I’ve dreamed myself into a corner so I have to be responsible for those dreams. I have to be out there doing it,” she explained. “Sometimes I work too hard, but I wanted this. I’ve seen these dreams come true and every time one dream comes true, you’ve got to support it. I really feel like I’m supposed to be doing something good in this world. I just want to get out there and try to shine a little bit, if I can.” 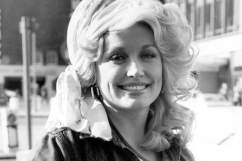 Dolly Parton Then & Now: PHOTOS Through the Years

Read More
ABC, Dolly Parton
Dolly Parton is releasing a special titled 'Here She Comes Again' on NBC. Find out how to watch it if you don't have cable.