Kuzco (David Spade) is a young, selfish Emperor who finds himself transformed into a llama by his scheming advisor, Yzma (Eartha Kitt), and her henchman Kronk (Patrick Warburton). In this 2000 animated comedy, Kuzco must befriend and rely on the peasant Pacha (John Goodman), whom he has treated badly, to safely find his way back to human.

Here’s how to stream The Emperor’s New Groove right now and everything you need to know about this classic Disney animated movie:

How to Stream ‘The Emperor’s New Groove’ – Exclusively on Disney+

The Emperor’s New Groove is one of the classic animated Disney movies that will be streaming exclusively on Disney’s new subscription streaming service, Disney+.

You can sign up for Disney+ HERE, which will allow you to stream The Emperor’s New Groove and hundreds of other movies and shows on your computer, phone, tablet, smart TV or streaming device. The service costs $6.99/month. You may also opt for this discount bundle of Disney+, Hulu and ESPN+ for $12.99/month.

Release Date: December 15, 2000
Creators: Executive Producer Don Hahn, Producer Randy Fullmer, Writers Chris Williams and Mark Dindal; based on an original story by Roger Allers and Matthew Jacobs
Director: Mark Dindal
Starring: David Spade, John Goodman, Eartha Kitt, Patrick Warburton
Rating: G
Synopsis: When Emperor Kuzco is turned into a llama by his scheming advisor, Yzma, and her henchman, Kronk, he must form a friendship with Pacha the peasant to get back to being human.

How Long Is ‘The Emperor’s New Groove’?

The Emperor’s New Groove is a 78-minute animated comedy adventure.

Emperor Kuzco is the selfish and often unkind ruler of the Inca Empire. When he fires his devious advisor, Yzma, for trying to secretly run the country, she and her henchman Kronk plot to take over the throne by poisoning the Emperor—but thanks to a mislabeled vial, they only succeed in turning him into a llama. Yzma orders Kronk to dispose of the llama, but Kronk’s conscience gets the better of him and he places on a cart belonging to the peasant Pacha, whose home Kuzco has recently announced he plans to demolish and replace with his own summer mansion, “Kuzcotopia.”

When Kuzco awakes in the cart, he blames Pacha for turning him into a llama and demands to be taken back to the palace. Pacha agrees, on the condition that he find a new location for Kuzcotopia. Kuzco refuses and begins the journey home himself. Before long he is chased by jaguars, and Pacha comes to the rescue. Kuzco accepts when Pacha extends his offer again, and the two set off on an adventure through the jungle that reveals that Kuzco is more than just the selfish, shallow character he first appears.

The next day, Pacha and Kuzco end up in a jungle restaurant at the same time as Yzma and Kronk, who have set out to find Kuzco after taking the throne. They don’t see each other, but Pacha overhears Yzma talking about her plan to do away with the Emperor. He tells Kuzco, who doesn’t believe him and tells Pacha that he was planning to raze his home all along. But when Kuzco then hears Yzma himself, he feels hurt and guilty and leaves alone to live his new life as a llama. Pacha chases him, still wanting to help Kuzco return to his human form, and the two reconcile and head back to Pacha’s house.

When they arrive, Yzma is there looking for them. Pacha’s family distract Yzma and Kronk while Pacha and Kuzco start back to the palace to find a potion to turn him human again. But Yzma ambushes them and orders Kronk to kill them. Kronk hesitates, and when Yzma insults him for it, he turns on her, but she opens a trapdoor and he’s gone. She tells the palace guards that Pacha and the llama murdered the Emperor, and the pair grab whatever potions they can as they run away, using the potions to transform Kuzco and the guards as they go.

They are finally cornered on a ledge with just two vials left. As Yzma and Kuzco struggle over them, they crush one vial, turning Yzma into a kitten. Pacha and Kuzco manage to get the last vial, but Yzma grabs it. As she celebrates her victory, Kronk opens a trapdoor onto her, and as she drops the vial, Pacha catches it and gives it to Kuzco.

Later, Kuzco is once again human and Emperor, and his experiences have tempered his selfishness. He has built a more modest Kuzcotopia on a previously unoccupied nearby hill. Meanwhile, Kronk has found a new calling as a scout leader. 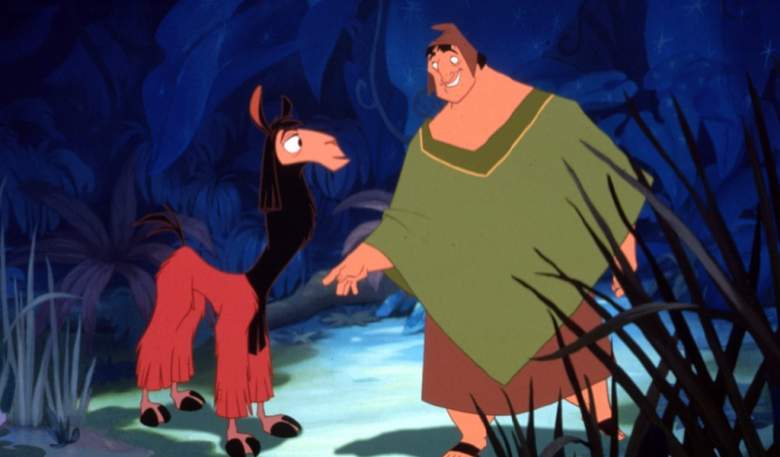 The Emperor’s New Groove featured several well-known voices from movies and television shows made for both adults and children. Here are a few of the main players.

Kuzco is the young and selfish Emperor of the Inca Empire whose scheming advisor Yzma turns him into a llama. Spade is best known as a writer and actor on Saturday Night Live from 1989 to 1993. His movies include the comedies Tommy Boy (1995), Black Sheep (1996), Joe Dirt (2001), and he played Dennis Finch on the television series Just Shoot Me! from 1997 to 2003 and Russell Dunbar on the series Rules of Engagement from 2007-2013. His kid-focused work includes voicing Ranger Frank in The Rugrats Movie (1998) and Griffin in three Hotel Transylvania movies (2012, 2015 and 2018).

Pacha is the kind peasant who helps Kuzco, even though the Emperor planned to turn Pacha’s home into a royal summer resort. Goodman has acted in more than 150 roles since the early 1980s, including his best-known character as Dan Conner in the long-running television sitcom Roseanne, which ran from 1983 to 1997 and made a brief comeback in 2018. Goodman also voiced Sully in Monsters, Inc. (2001) and Monsters University (2013) and Big Daddy La Bouff in The Princess and the Frog (2009).

Yzma is the devious advisor to Emperor Kuzco who plans to poison him and take the throne. Best known as a singer, Kitt began performing in the 1940s and acted in more than 70 credits. Her 1953 song “Santa Baby” was a U.S. Top 10 hit. In addition to The Emperor’s New Groove, Kitt also voiced Yzma in the 2006 to 2008 television series The Emperor’s New School.

Kronk is Yzma’s evil henchman who faces various crises of conscience when she orders him to kill Kuzco and Pacha. Warburton began acting in the mid-1980s and has appeared in nearly 200 roles, including on episodes of numerous television favorites, but grown-ups might recognize him as Joe Swanson from the animated TV comedy Family Guy (1999-2019). Warburton also voiced Kron in the television series The Emperor’s New School (2006-2008), Buzz Lightyear in Buzz Lightyear of Star Command (2000-2001), Sheriff Stone in Scooby-Doo! Mystery Incorporated (2010-2013), Wolf W. Wolf in the movie Hoodwinked!, and played Steve Barkin in the 2002 to 2007 television series Kim Possible, Lemony Snicket in A Series of Unfortunate Events (2017-2019), Brock Samson in The Venture Bros. (2003-2018), and Jeff Bingham in the series Rules of Engagement (2007-2013).

Despite its groovy name, The Emperor’s New Groove was notable as a Disney animated feature for its lack of major musical numbers. It included two original songs written by Sting, “My Funny Friend and Me,” which he also performed, and “Perfect World,” performed by Tom Jones. “My Funny Friend and Me” was nominated for an Academy Award for Best Song but lost to a Bob Dylan tune from Wonder Boys. It won the Broadcast Film Critics Association Award for Best Original Song and the Phoenix Film Critics Society Award for Best Song.

‘The Emperor’s New Groove’ at the Box Office

The Emperor’s New Groove hit box offices nationwide in December 2000, earning more than $89 million in the United States and another $80 million internationally. The movie was released on home video in 2001 and became the best-selling home video release that year.

‘The Emperor’s New Groove’ Reviews – What the Critics Said

With nearly 200 critic and viewer reviews on Rotten Tomatoes, The Emperor’s New Groove has an 85% approval rating. Critics liked the overall lightness and silliness of the movie and noted that its animation lacked a certain polished quality that actually made the film more endearing. The movie received numerous award nominations and won several, including the 2001 Annie Awards for Individual Achievement in Voice Acting (Eartha Kitt; Patrick Warburton was also nominated), Individual Achievement in Character Animation (Dale Baer) and Individual Achievement in Music (Sting and David Hartley).

The Emperor’s New Groove is seen as somewhat of a departure for Disney movies, both in its rather silly story and its more laid-back animation style. The entertainment media website IGN ranked The Emperor’s New Groove as the 16th best Disney animated film, saying that it’s “more of an out-and-out comedy than most Disney offerings…featuring a more markedly Chuck Jones cartoon-ish animation style.” Roger Ebert says “[the plot] would be thin if this were the typical uplifting Disney fable, but it isn’t. The Emperor’s New Groove seems to have been made over in a corner of the Disney lot by animators who just wanted to laugh a lot and wear funny hats.”

Looking for some extra tidbits about The Emperor’s New Groove? Love trivia? Here are five fast interesting facts surrounding the movie and its release:

You might recognize the voice of Theme Song Guy, voiced by the world-famous musical performer Tom Jones.

2. ‘The Emperor’s New Groove’ took Six Years to Make and Began as a Traditional Disney Musical.

The musical was to have been directed by Dindal and Roger Allers, who also co-directed The Lion King. Kingdom of the Sun, as it was called, was sort of an Inca-themed version of The Prince and the Pauper, with David Spade as the Emperor and Owen Wilson as the peasant. But the concept evolved into a film that has no significant musical numbers—rare in the world of animated Disney movies. Sting’s wife, filmmaker Trudie Styler, produced a documentary about the production of Kingdom of the Sun.

3. Some Viewers Think ‘The Emperor’s New Groove’ Has a Dark Secret—Murder

During the scene where Kuzco the llama runs into the jungle alone, he sees a fly caught in a spider web and hears it cry, “Help me!” just before it is eaten. Because all the other animal characters who can talk used to be humans, some viewers believe the fly is another human that Yzma has turned into an animal and now ultimately killed.

4. A Great Villain Song Sung by Eartha Kitt Was Deleted From the Movie

It’s called “Snuff Out the Light,” and you can hear it for yourself.

5. Pacha’s Wife, Chicha, Was the First Pregnant Character in a Disney Animated Film

She was also unusual in Disney films in her presence as a mother character-wise, loving, funny, strong, and in a loving and healthy relationship with Pacha.