Professional athletes live a life of luxury when they’re hauling in millions. However, for many it doesn’t last forever, and the ESPN Films 30 for 30 Broke covers how millionaire athletes end up losing all their money shortly after retirement with exorbitant and unchecked spending habits.

How to Watch ‘Broke’ Online

Every film in the complete 30 for 30 library, including Broke, can be watched with a subscription to ESPN+.

Once signed up for ESPN+, you can watch Broke on your computer via the ESPN website, or you can watch on your phone (iOS or Android), tablet, Roku, Fire TV Stick, Apple TV, Xbox One or other compatible streaming device via the ESPN app. 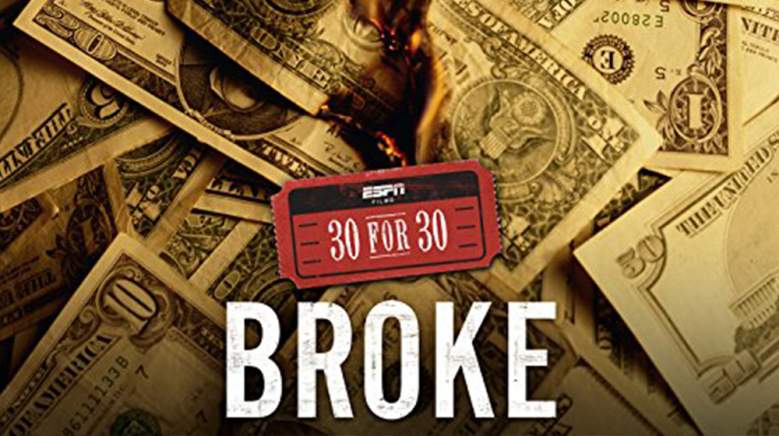 The life of an athlete can look glamorous from the outside looking in. But when the spotlight goes off, there are a good chunk of stars who end up broke, which is profiled in the appropriately named ESPN documentary “Broke.”

Two shocking statistic the documentary offers (per Pablo Torre of Sports Illustrated)  are:

Here’s the official summary of the film, per IMBD: According to a 2009 Sports Illustrated article, 60 percent of former NBA players are broke within five years of retirement. By the time they have been retired for two years, 78% of former NFL players have gone bankrupt or are under financial stress. Sucked into bad investments, stalked by freeloaders, saddled with medical problems, and naturally prone to showing off, many pro athletes get shocked by harsh economic realities after years of living the high life. Drawing surprisingly vulnerable confessions from retired stars like Keith McCants, Bernie Kosar and Andre Rison, as well as Marvin Miller, the former executive director of the MLB Players Association, this fascinating documentary digs into the psychology of men whose competitive nature can carry them to victory on the field and ruin off it.

Director Billy Corben (The U, Cocaine Cowboys, Limelight) paints a complex picture of the many forces that drain athletes’ bank accounts, placing some of the blame on the culture at large while still holding these giants accountable for their own hubris. A story of the dark side of success, “Broke,” is an allegory for the financial woes haunting economies and individuals all over the world.

“This is what we call a sudden wealth event. Oftentimes, players come from very humble beginings and suddenly, almost overnight, are multimillionaires. And when you don’t have the experience of preserving wealth and growing wealth, it’s a very onerous and complicated process,” Corben told Radio.com “And of course, as, as we’re seeing, allegedly in the Peterson case, the individuals that athletes often trust with the responsibility of preserving and growing their wealth, can’t be trusted.”

Being a professional athlete isn’t the easiest path of survival financially without the right team around. After all, acquiring unimaginable amounts of wealth in your early 20s isn’t something most are equipped to handle without some sort of education and planning.

“My business manager got a call from Fila who was interested in signing me. Fila threw in a Ferrari as a signing bonus,” Jamal Mashburn says in the film. “So at the age of 20-years-old, I got a Ferrari in a one car garage that I can’t drive because I can’t drive a stick.”

Here are some other shocking points:

Kosar said he ended up supporting a massive amount of family members, including his father.

“My father, every single day of my life growing up, I was gettin him a cold one, gettin him a beer. It was something that, you know, affected me, because if you didn’t do it fast enough, you know, you’re gettin hit with the belt,” Kosar said. “I don’t like to remember that, I don’t want my dad to be angry like that. Maybe if, uh, I let him have the money, that that stuff would make him happy and go away.”

Kosar ended up filing for bankruptcy in 2009 after the collapse of the Florida real estate market.

Athletes handle going broke in different ways, many times blaming others who became leeches on their wealth. However, some self-reflection in the documentary also revealed some wild spending habits on cars, houses, jewelry and tailored suits.

“I had an injury settlement of sixty thousand dollars, six of it my wife got in child support. Instead of me putting the money away, the Hummer had just come out. And I drive by and I see it and uh, I take the fifty-four thousand I have and I work out a deal with the guy and I pay fifty grand cash for the Hummer. Because I had to have it.”

Broke drew some mixed reviews after its premier in 2012, but it did pound home the point.

“The sketchy relationship between athletes and money involves more than just over-indulging in strippers. More fundamentally, as Broke points out, it’s a matter of young men who suddenly find themselves with a ton of money that they obtained not with business acumen but for their ability to throw a ball. Even the most sober of them has little idea how to handle it,” wrote Glenn Garvin of The Miami Herald in his review.

Name a sport, and it’s probably on ESPN+ at some point throughout the year:

Other ESPN documentaries and films that aren’t included in the actual 30-for-30 series are also available on ESPN+, including D. Wade: Life Unexpected, Venus vs, The ’99ers and others.

The list of ESPN+ originals continues to grow. It includes Peyton’s Places, The Boardroom with Kevin Durant, NBA Rooks, Ariel & The Bad Guy, The Fantasy Show and Alex Morgan: The Equalizer.

In addition to live UFC events, ESPN+ also features a vast library of past fights you can watch. This includes classics from Conor McGregor, Anderson Silva, Michael Bisping, Brock Lesnar, Khabib Nurmagomedov, Nick Diaz, Nate Diaz, Frank Mir and others. You can find a complete rundown of the ESPN+ UFC library here.

READ NEXT: How to Watch UFC on ESPN Plus

Read More
Live Sports Streaming, Streaming TV
'Broke' explores how many professional athletes fail to hold onto their money. Here's how to watch the 30 for 30 film streaming online.