Just a few days before Nokia unveils its lineup at Mobile World Congress, leaked images and specs of the mid-tier devices, the Lumia 520 and Lumia 720 have surfaced. Thanks to EvLeaks for providing the images, the Lumia 520 and Lumia 720 will come in bright colors, similar to other Nokia devices. It’s expected that Nokia will offer the new handsets in black, white, red, yellow and cyan.

We should expect to learn more information about the two new Lumia devices during Nokia’s press conference at Mobile World Congress. 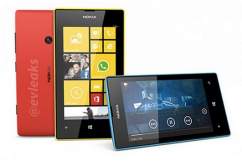