The Android website has finally released the stats of the Android OS and it seems that Android 4.0 has surpassed Android 2.3 Gingerbread to become the most widely-installed, despite its slow uptake. Both the Android 4.0 Ice Cream Sandwich and 4.1/4.2 Jelly Bean have a combined total of 45.1 percent, which is narrowly above Gingerbread which sits at 44.2 percent.

Android 4.0 Ice Cream Sandwich was launched in late 2011 and took about nine months to be installed on 10 percent of devices.  The quick updates and iterations can likely be attributed to this increase. Notably, are the added major improvements for developers such as the new APIs for camera, better calendar and contacts access, improved accessibility features and the addition of enterprise features.

Maintaining compatibility on older versions however is not an easy ride. A case in point involves Facebook, where the company had to create a Dalvik patch for its Android app to work on both newer and older versions of Android. The Dalvik Virtual machine is Android’s runtime engine which handles Java methods. It was only after employing multiple crazy hacks were the engineers able to pull it off.

There is no doubt that gaining the majority share is a major milestone, but this in no way gives an exact figure of the numbers. Dashboard data includes only the devices that have accessed Google Play within a given 14-day period. While the results will likely skew toward the newer Android OS versions, it is great to see the uptake finally being dominated by the more improved Android Ice Cream and Jelly Bean versions. 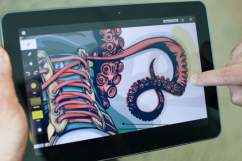 Read More
Android, Statistics, Technology
The latest versions of Android 4.0 and up, have surpassed Gingerbread.