Apple recently filed a patent for a device that has a “wrap around AMOLED display.” The patent was first seen by Apple Insider, and it’s possible that Apple is currently working on creating an iphone that’s just one big screen featuring virtual buttons and touch gestures. This means physical buttons would be replaced in upcoming iPhones. In the patent, the design will be similar to the iPad nano and even the current iphone.

The patent goes into detail saying that the device will have built-in facial recognition, see-through displays and even the appearance of 3D. Apple shows various device design which represents different shapes that could be used with the new glass display, Apple also talked about being able to have removable end caps that could make it so two devices could be joined together.

Since the entire phone is one big screen, Apple proposed that the device could recognize what is important and what it should ignore, which is a pretty cool new feature. The last part of the patent describes the device as having layered, transparent displays that can show a single image to show in 3D or show different content. It can also place information on top of each other to would be building a complete reality experience.

Although Apple has been previously using Retina display on its products, the company may be looking to use wraparound display because of its clarity on a curved display. The wraparound display would also allow users to view more apps, photos, videos and text on a screen from various degrees.

Apple applied for a similar patent with the same kind of flexibility last year when they filed for “Electronics Devices With Flexible Displays.” Samsung is also looking to use the same concept on its Galaxy Note 3.

Out of all the patents that have surfaced this is by far the most exciting one. It’s nice to imagine what the next-generation smartphone could look like with wrap around AMOLED display. Since Apple just filed the patent, it will take a while before the technology is developed. Hopefully we’ll see some of these new features by the time the iPhone 7 or 8 come out. 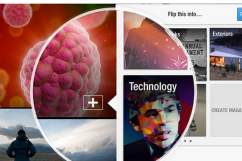