Share via E-mail Share on WhatsApp
The Daily Beast reported today that the Obama administration will take the drone program away from the CIA and hand it over to the Pentagon. Here’s what you need to know about the story. This story is still developing, so stay tuned for updates.

1. This MAY Help Increase Transparency for the Drone Program
After Rand Paul’s historic filibuster, the CIA’s drone program has been highly scrutinized by private citizens, politicians, and the media. Hopefully, this move should clarify the decisions that are made behind drone strikes. Jack Goldsmith, a national security professor at Harvard Law School, says to Mashable that an increase in transparency may not actually be the case. “”Compared to CIA’s lethal drone operations, DoD’s lethal drone operations are not more transparent to the public and are less transparent to Congress,” he said.

However, Obama spoke about increasing transparency for the drone program during his State Of The Union address in January. He said, ““In the months ahead, I will continue to work with Congress to ensure that not only our targeting, detention, and prosecution of terrorists remain consistent with our laws and systems of checks and balances, but that our efforts are even more transparent to the American people and to the world.”

2. It Could Toughen the Requirements for Drone Strikes
The Daily Beast notes that moving the drone program from the CIA to the Pentagon could make it more difficult to order a drone strike. How the policymakers decided who drones were to be used on has been a hot topic of debate recently.

3. The Plan Will Unify Two Existing Drone Programs
Currently, the US government runs two drone programs, one commanded by the CIA and the other by the Department of Defense. The new plan will bring these programs together and have added uniformity, leadership, and accountability. The CIA has been in charge of the drone program since 2002, and the entire process could take only a year to be fully implemented. 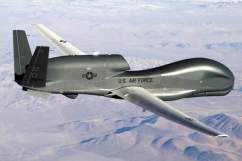 The 6 Drones You Need to Know About

4. The CIA Will Still Play a Role
Even though they might not be leading the program, the CIA will still be involved in deciding potential targets, along with the Pentagon. The CIA involvement in the drone program will be cut down significantly though, and the agency could be phased out eventually. The CIA will be involved in the intelligence side only, apparently, and not have control of the actual drones or be involved during the drone strikes themselves.

5. Drone Strikes Will Now Be “Clandestine” Instead of “Covert”
CIA has the legal authority to classify projects and missions as “covert,” writes Mashable. This means that these missions are not only classified, but members of the CIA can actually deny the existence of “covert” programs to Congress. The Pentagon doesn’t have the same level of secrecy.