Earlier this week rumors were flying around that Facebook had plans to announce the redesign of its news feed at its Headquarters in Menlo Park, CA on March 7th, 2013. The redesign of the social network’s news feed would be aimed at keeping users coming back for more and trying luring in more advertisers. Some executives over at Facebook have said they would like to see the News Feed become the homepage of Facebook. Mark Zuckerberg also said, the news feed could look like more videos, bigger photos and more engaging ads.

Today, Facebook revealed the new design of the site’s news feed. CEO Mark Zuckerberg talked about making the news feed similar to a personalized newspaper. The personalized newspaper should be visually engaging reflect change. The new news feed will include multiple feeds, including an All Friends Feed, Music Feed, Photos Feed and Followers Feed.

“It is a design to provide you with the best personalised newspaper,” explains Zuckerberg.

Facebook will be rolling out the new news feed starting today. The company will be deploying the newsfeed to smartphones and tablets over the next few months. Zuckerberg says the new design will make people feel more connected to the people they care about, and to the things they love.

Check out this video on why Facebook redesigned its news feed. 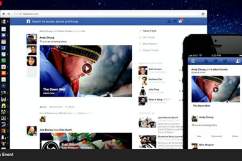