The SXSW 2013 in Austin is well underway and Google is one of the companies showing off its now popular wearable tech, Google Glass. This time however, Google’s presentation was filled with apps from Evernote, New York Times, Path and Skitch and of course, a Gmail app.

The Gmail app works by displaying the sender’s image and subject line onto the screen using voice command prompts. You can then tell the app what to write back as a reply.

The New York Times app will deliver article headlines, bylines, images and the number of hours the article was posted. You can even tell Glass to read out the article for you with a tap. An automatically-refreshing breaking news feature is already in the works.

You will also be able to share images to Evernote and Skitch and see updates from your Path network along with being able to add emoticons to posts and comments.

Google has also confirmed that Google Glass will work with prescription glasses. According to the Glass G+ page, future models will be compatible with custom lenses, which has always been an important design consideration for the Google Glass team.  The current Explorer Edition however does not support prescription lenses.

Prior to its public availability by the end of 2013, Google Glass has been ramping up steam with developer hackathons and fundings to promote the technology. Google has recently made significant strides to make Glass more comfortable and attractive and the new apps no doubt make Google Glass even more attractive. 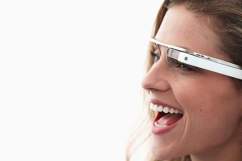 This Google Glass App Will Recognize People By Their Clothes