Google’s Eric Schmidt spoke at Google’s Big Tent Conference in India this morning and said that Google Now is making its way to the iPhone and iPad.  You can now listen to the recording here, just skip to 17:50 to hear about Google Now coming to iPhone.

A promo video of Google Now was leaked last week, but was removed instantly. Google Now will launch soon, its just waiting on approval from Apple. Google Now has been exclusive to Android Jelly Bean devices. Google Now gives users the information they need before they even search for it.

Apple’s process in accepting new apps has been slow in the past, but has recently improved. Google Maps app for iPhone was instantly approved, we’ll just have to wait and see if it will be the same process for Google Now. 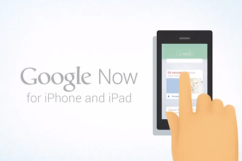