Share via E-mail Share on WhatsApp
The iPad Mini has been a huge success for Apple and has quickly become more popular than the original iPad. With consumers waiting anxiously for the iPad Mini successor, here’s what we know so far about the rumored iPad Mini 2. Make sure to come back and check for new updates on the iPad Mini 2, because we’ll be updating this post as new news breaks regarding the upcoming mini tablet from Apple.


According to recent reports, Apple is preparing the iPad Mini 2 for a public release in the third quarter of 2013. This would mean that Apple would be releasing the iPad Mini 2 sometime during the fall of 2013, almost a year after the original iPad Mini was unveiled in an event last October. However, it’s important to note that some news outlets are anticipating the iPad Mini 2 will be released earlier, with some saying the new Apple tablet could arrive as soon as the summer.

2. It Will Probably Have a Retina Screen

3. It Will Have a Better Processor, Too


The iPad Mini hardware specs were less than impressive to most tech enthusiasts and experts when the tablet was unveiled in October. Essentially, the entire device was a smaller and lighter version of the iPad 2, with an A5 chip and non-Retina screen. But, most reports indicate that Apple will boost up the processor, to the A5X in the iPad 3 or the A6 chip in the iPhone 5.

4. It Will be Around the Same Price as the Original iPad Mini


The cheapest model of the iPad Mini, the 16GB device with only Wi-Fi connectivity, was priced at $329, way more than competing devices like the Nexus 7 and Kindle Fire. However, compared to the iPad 3, the iPad Mini is a steal. The iPad 3 was originally priced at a hefty $499. Historically, Apple tries to keep prices around the same as before, which means that we can probably assume that the iPad Mini 2 will be around $329 or so.

5. Design-wise, the iPad Mini 2 Will be Almost Indistinguishable From The Original

6. It Will Continue To Undercut iPad Sales


The biggest issue with the iPad Mini is that consumers are flocking to buy the smaller, less expensive device, instead of splurging to purchase the bigger iPad. With the iPad Mini 2 and the iPad 5 release rumored to come out in the same year, its easy to assume that Apple will continue to see sales for the iPad Mini rising, as the number of iPads sold drop precipitously.

7. The iPad 5 May Be Released At The Same Time


In October, Apple unveiled both the iPad Mini and the iPad 4, which came less than six months after the iPad 3 was introduced (Apple also unveiled a number of other products as well). GottaBeMobile reports that the iPad 5 and iPad Mini 2 may follow a similar structure and could be released at the same event. 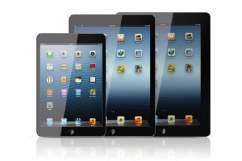 8. It Will Still Be Better Than Its Competition


The iPad Mini might be the rookie when it comes to the small-tablet industry, but it is by far the most powerful and most sophisticated. While devices like the Google Nexus 7 and Kindle Fire HD are affordable, the fact that they are so cheap means that they miss out on some key hardware specs, like a high-def screen and fast processor. Look for Apple to build on the iPad Mini and continue to be the leader in the tablet market.


CNYes, a Chinese website, wrote that Apple would be ordering 55 million iPad Mini 2’s. In addition to the 9.7-inch iPad’s that Apple will be producing as well, early estimates indicate Apple could sell as many as 100 million tablets in 2013.

10. But, Apple Will Be Cutting Back iPad Production