Samsung and Apple won’t be the only companies battling it out to see who can produce the best smartwatch. LG and Google seemed to have also joined the smartwatch race. According to Korea Times, LG is in the process of working on a smartwatch and a product similar to Google Glass. The source said, “The company has spared no efforts to invest in products that it believes are must-haves to stay ahead technology wise in the market, whatever the situation may be.”  It’s been said that LG’s new smartwatch will be powered by Android or Mozilla Firefox OS. This wouldn’t be the first smartwatch that LG has produced. Back in 2009, the electronics giant introduced the LG GD910.

According to a report by the FInancial Times, Google is also working on a Android-based smartwatch. It’s rumored that Google’s Android unit is in the process of developing the new smartwatch. Although Google hasn’t made any comment, a patent document was revealed last year, and it looks like Google’s smartwatch will be a “smart phone on your wrist.” The patent shows Google’s smartwatch will feature a flip-up display, wireless connectivity, a camera and a touch screen display.

While most of these reports are just rumors, Samsung has been the only company to actually confirm working on a smartwatch. It will be interesting to see who launches a smartwatch first. 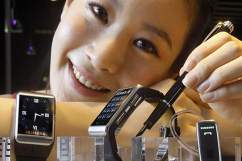 Samsung is Working on ‘Smart Watch’ to Rival Apple’s iWatch