Razer, a world leader in high-performance gaming hardware, software and systems, first introduced the Razer Edge Pro as “Project Fiona” at CES in 2012. The Razer Edge Pro tablet was designed by PC gamers and won CNET’s “Best of CES 2013.” Min-Liang Tan, Razer co-founder said “When we decided to design a tablet from the ground up, we did it to create a phenomenal experience for mobile gamers. By combining the best of PC and console gaming with Windows 8, we’ve created a true gaming tablet.”


Running on a clean version of Windows 8, the Razer Edge Pro can work with Photoshop and Quicken. According to the Verge, the device works well when it comes to streaming HD movies and editing photos. The Razer Edge Pro not only brings a new way to play PC games but can also be used as a powerful Windows 8 tablet.

3. It’s the Most Powerful Tablet for PC Gamers


The Razer Edge Pro is powered by a 1.9GHz quad-core Intel Core i7 processor, 8GB of RAM, the NVIDIA GT 640M LE (2GB), HD 4000 graphics chip, and comes with either 128GB or 256GB of internet storage. The battery will last for about 2-3 hours before you need to charge it again. According to PC World, when compared to the Surface Pro, Acer W700 and Lenovo, the Razer Edge Pro won when it came down to productivity. The machine was built with performance in mind.

4. The Razer Edge Pro is Bulkier Than the Surface Pro

5. The Device Can Perform in 4 Modes


The device can perform in 4 different modes: The Tablet mode, Keyboard mode,  Home Console mode and the Mobile Console mode.

Tablet mode: Any Windows 8 touch based games can be played while you’re on the go.

Keyboard mode: You can purchase a dock from Razer for $99. Keyboard mode is like dropping the Edge Pro into a keyboard dock.

Home Console mode: Lets you connect the device to a home theater screen or additional screens.

Mobile Console mode: Handlebars will stick out on either side and will give you that feeling of having a controller. The controller costs around $250.00. 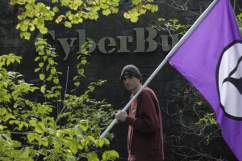 Meet the Man Behind the Biggest Cyberattack in History [EXCLUSIVE INTERVIEW]

6.The Keyboard Has a Direct Reflective Acoustic Chamber
The keyboard dock will allow you to convert your tablet into a laptop similar to the Transformer Prime. This is ideal if you want to use word processing. The keyboard also has a direct reflective acoustic chamber which enhances the sound further.

7. Not Every Game is Compatible With the Gamepad Dock


The Gamepad Dock has two handle-bars on both sides of the tablet. Both grips have a eight buttons and a mini joystick, D-pad can be found on the left hand side and and you can also find the A, B, X, Y buttons on the right hand side. The dock comes with second with a slot if you want a second battery which is sold for $69.99. The dock is pretty sturdy and keeps everything in its place. It’s good for intense gaming sessions. Most of the games were made for the keyboard and not the gamepad dock. Razer’s Launcher dashboard will let you browse through games and will tell you which games are compatible with the gamepad dock. You can play BioShock Infinite and Skyrim for about 2-3 hours.


Razer talked to over 10,000 gamers to get heir input on what specs, price, features, etc Razer should add into the gaming tablet. Min-Liang Tan posted the final spec on his Facebook: “Over 10,000 PC gamers voted to say that it should be feature an Intel Core CPU, mid-range discrete graphics card, up to double the thickness and weight of the new iPad, detachable controls and be priced at US$1200-$1400.”

10. The Edge Pro Costs More Than Your Monthly Car Payment