We have seen the internet filling up with rumors about the upcoming Galaxy S IV. Unfortunately, no one really knows how the latest iteration to the Galaxy S3, and the young Jeremy Maxwell, the secret messenger of Samsung Unpacked 2013, teaser trailers is not helping at all in this revelation.

To further heighten anticipation, Samsung also released a sequel to the teaser trailer we saw last week. The trailer however is still a little disappointing since we don’t get a glimpse of the upcoming handset. To make up for it, Samsung Tweeted a photo that reveals what could be the front view of the Galaxy S IV. Although Samsung doesn’t identify the device, it’s pretty obvious of what it is.

The countdown for #TheNextBigThing has begun. Who’s ready for the Global Unpacked Event on March 14? twitter.com/SamsungMobileU… 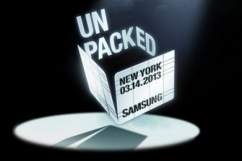