Samsung unveiled its latest flagship phone, the Galaxy S4, at Radio Music City Hall in New York on Thursday. The new Galaxy S4 is packed full of new features, and is slimmer and lighter than the Galaxy S III. Here are the top 10 facts you need to know about the Galaxy S4.

1. The Samsung Galaxy S4 is Powered By Exynos 5 Octa Processor

The Galaxy S4 will be powered by Samsung’s Exynos 5 Octa processor, which was first introduced to us back in January at CES. The Galaxy S4 will feature a 5-inch full HD super AMOLED 441ppi display, 2GB of RAM, 16/32/64 GB of storage, will run on Android 4.2.2 Jelly Bean, and will have a 2,600maH battery.

2. The Samsung Galaxy S4 Will Come In 3G and 4G LTE Versions

The Galaxy S4 will have over 327 carriers in over 150 countries, in both 3G and 4G LTE versions. In the U.S., it will be offered on Verizon, Sprint, AT&T, T-Mobile, as well as other carriers.

3. Samsung Confirmed The Galaxy S4 Will Have Eye Scrolling Feature

With the new Eye Scroll feature you will no longer have to use your fingers to scroll. For example, if you’re reading an article on Heavy.com, and your eyes go to the bottom of the page, it will automatically show more content for you to read.

3. Samsung Made Improvements to Its Camera Technology

The Galaxy S4 will have a 13MP rear camera and 2MP front camera and will have some pretty new features including Dual Shot, Eraser, Drama Shot and Sound & Shot. Dual Shot will allow you to use both rear and front cameras at the same time. Both video and photo shots will use different “stamps” or filters. Sound and Shot feature will let you record audio 5 seconds before you shoot. Eraser will capture multiple frames at once, and you will be able to remove any unwanted subjects. Drama shot lets you take more than 100 shots in 4 seconds, and composite some shots in a single frame.

4. The Galaxy S4 Can Translate Over 10 Different Languages

S Translator lets you speak into the device, and it speaks the translated phrase for you. It supports over nine languages with text-to-speech, speech-to-speech, or speech-to-text.

6. The Galaxy S4 Will Come With a Personal Assistant

The S Voice uses voice recognition to do most major features through speech, including responding to your messages and acting as a personal assistant.

7. The Galaxy S4 Can Be Used As a Remote Control


The Galaxy S4 will come with an IR sensor that can act as a remote control for turning on your TV, switching channels, and browsing listings.

8. The Galaxy S4 Comes With a Fitness Diary

9.You Can Wave Your Hand Over the Screen To Browse Your Photos


The Galaxy S4 also includes a new Air Wave feature. By waving your hand over the screen, it will cycle through all of your photos. If you want to browse previous photos, just wave your hand to the left. If you want to rowse forward, simply wave to the right. To accept a call, all you have to do is wave across the screen.

10. The Galaxy S4 Will Be Shipping in April
Samsung didn’t really announce a price or specific release date, but mentioned that the device will be released anytime between April and June of this year. 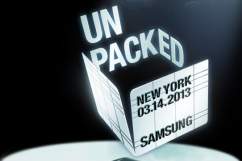